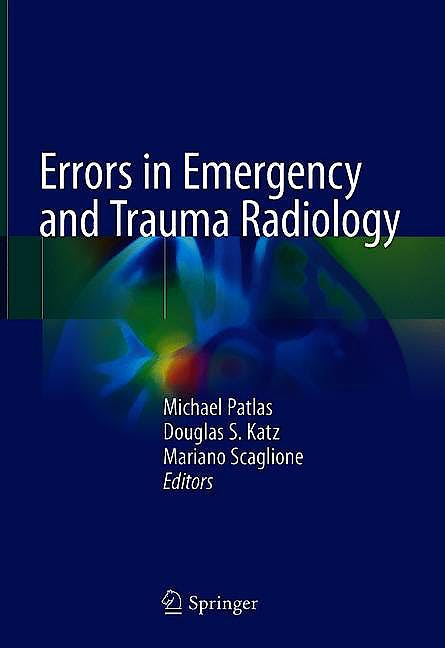 Errors in Emergency and Trauma Radiology

This book describes and illustrates the gamut of errors that may arise during the performance and interpretation of imaging of both nontraumatic and traumatic emergencies, using a head-to-toe approach. The coverage encompasses mistakes related to suboptimal imaging protocols, failure to review a portion of the examination, satisfaction of search error, and misinterpretation of imaging findings. The book opens with an overview of an evidence-based approach to errors in imaging interpretation in patients in the emergency setting. Subsequent chapters describe errors in radiographic, US, multidetector CT, dual-energy CT, and MR imaging of common as well as less common acute conditions, including disorders in the pediatric population, and the unique mistakes in the imaging evaluation of pregnant patients. The book is written by a group of leading North American and European Emergency and Trauma Radiology experts. It will be of value to emergency and general radiologists, to emergency department physicians and related personnel, to general and trauma surgeons, and to trainees in all of these specialties.

Michael N. Patlas, MD, FRCPC, FSAR, is a Professor of Radiology and Emergency/Trauma Division Chief at the McMaster University, Hamilton, ON, Canada. He has authored over 185 peer-reviewed papers, chapters, and abstracts and edited two books. Dr. Patlas is a Program Chair for the Annual Meeting of the Canadian Association of Radiologists. He is a Vice-President of the Ontario Association of Radiologists. Dr. Patlas is an editorial board member for Emergency Radiology, Current Problems in Diagnostic Radiology, and Annals of Clinical & Laboratory Science, and a reviewer for ten journals. He has received multiple accolades for his research and clinical activities, including a Young Investigator Award from the Canadian Association of Radiologists, the Hamilton Health Sciences Medical Staff Association President's Award for Distinguished Service, McMaster University Academic Radiologist of the Year, and fourteen awards from the RSNA. He is an honoured Fellow of the Society of Abdominal Radiology.

Douglas S. Katz, MD, FACR, FASER, FSAR (Fellow of the American College of Radiology, the American Society of Emergency Radiology, and the Society of Abdominal Radiology), has been the Director of Body Imaging and Vice Chair for Clinical Research and Education at Winthrop University Hospital (now NYU Winthrop Hospital), Mineola, Long Island, New York, USA since 1999, and as of late 2018 is now Vice Chair of Research at that institution. He has also been Professor of Radiology at the State University of New York at Stony Brook's School of Medicine since 2003. He has co-authored more than 800 publications (H index: 42; i10 index 134) and abstracts, as well as three books, several syllabi, and multiple book chapters. He has been attending of the year five times at his institution and is a past president of the Long Island Radiological Society. More recently, he has received top awards from his institution and medical school, including alumnus of the year in 2012 (Stony Brook), top academic honors from Winthrop in 2014, and the top teaching award from Stony Brook in 2017, the Aesculapius Award. He has been a three-time Honored Educator of the Radiological Society of North America, most recently in 2018. He currently holds or has held multiple roles in radiology organizations locally, regionally, nationally, and internationally.

Mariano Scaglione, MD, is Head of the Radiology Department at Pineta Grande Hospital, Castel Volturno, Italy and also a Consultant Radiologist at the Sunderland Royal Hospital, UK. Dr. Scaglione is frequently an invited speaker at international meetings, where he has delivered more than 100 presentations. He has published more than 120 papers, edited 12 books, and been the primary author for 32 book chapters. He has also been the Guest Editor of four themed Emergency Radiology issues in various radiology journals (Eur J Radiol 2006 and 2008, Radiol Med 2015, and BJR 2016). He is an editorial board member for many Radiology journals, including Emergency Radiology, the official journal of the ASER. Dr. Scaglione was Chairman for the Emergency Radiology Subcommittee at ECR in 2012, President of the Italian College of Emergency Radiology SIRM from 2010 to 2014, and ESER President from 2015 to 2017.