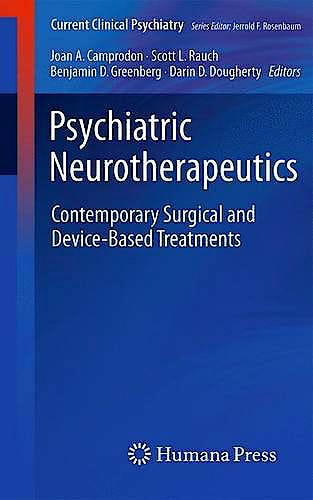 We propose an edited volume concerning the gamut of surgical and device-based treatments for psychiatric disorders. Contributions will be solicited from multiple authors, representing the leading experts in the field from the US and around the globe. Paralleling neuroscience advances regarding the neurobiological underpinnings of psychiatric diseases, emerging surgical and device-based treatments can be understood in terms of the brain circuits that they purportedly modulate. Electroconvulsive Therapy is among the most tried and true treatments for major depression, though its mechanism of action remains poorly understood. Transcranial Magnetic Stimulation, though experimental, is being developed as a potential therapeutic modality, as it enables brain stimulation via the non-invasive use of a directed magnetic field. Vagus nerve stimulation (VNS) is a recently FDA approved surgical treatment for resistant depression that enables brain modulation via electrical stimulation of the vagus nerve.