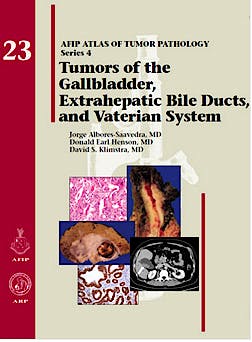 The current Fascicle contains new information accumulated during the last ten years on tumors and tumor-like lesions of the gallbladder, extrahepatic bile ducts and Vaterian system. Because of the increasing number of laparoscopic cholecystectomies and Whipple procedures performed, surgical pathologists now have the opportunity to examine more cancer precursors, early cancers, and adenomas of the gallbladder, extrahepatic bile ducts and ampulla of Vater than previously. These lesions are discussed in detail and profusely illustrated. Likewise, lesions that closely simulate malignant neoplasms are also described and illustrated. Also included are the giant cell neoplasms and the gastrointestinal stromal tumors as well as the new subtypes of carcinomas such as large cell neuroendocrine carcinomas and adenocarcinomas with pyloric gland or foveolar phenotype. The role of immunohistochemistry in the diagnosis of a wide variety of neoplasms is emphasized, as well.