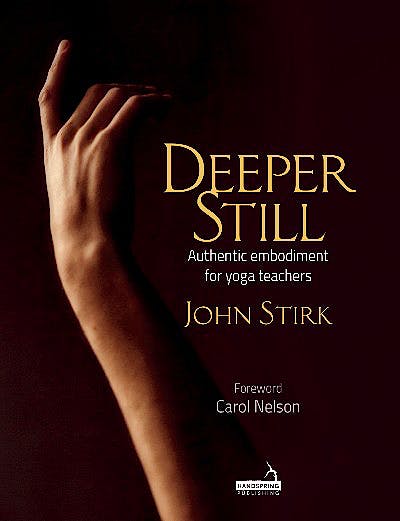 Take a look inside this beautiful book…

Deeper Still is the next stage of an ongoing process and a consequence of further inquiry into the yoga experience from author John Stirk. Following on from The Original Body this book invites an even deeper immersion into the reality of practice and the totality of personal experience in accessing the power of our inner teacher.

Many yoga teachers have adopted a relatively shallow approach when compared to the deeper approach of traditional practice. Perhaps yoga teachers are comfortable with teaching the exercises but unwittingly reticent when it comes to opening up a deeper experience that includes transformative shifts in consciousness. No amount of external information, however inspiring, can take us to that shift in consciousness. Only we can step, unaided, across the fine line between conditioned and unconditioned responses into the transformational shift that yoga provides. In Deeper Still yoga teachers are invited to deepen your potential for transcending ‘the norms of yoga’, and in so doing to discover and provide for students an ever deepening and transcendent approach.

Write your own story, develop your own script, ride the uncatchable wave that might be called yoga, and open up your creativity to the next level!

John Stirk is a yoga teacher and author with a background in osteopathy. He has been teaching yoga since 1974. He graduated as an osteopath in 1983 at the College of Osteopaths in London where he subsequently lectured in biomechanics and practical osteopathy. He was made a fellow of the College in 1995. His association with R. D. Laing in the 1970s and 1980s and his attraction to the teaching of J. Krishnamurti have inspired his approach to a quality of consciousness realized through hatha yoga practices.

John stopped practising osteopathy in 2005 to focus exclusively on yoga teaching and use his osteopathic and philosophical understanding to inform teachers. His approach has influenced many teachers in the UK and internationally.

His interests lie in the power of group work and the potential insight and wisdom that arise spontaneously within the group field. He invites yoga teachers to take a step further, to trust and share their own insight and wisdom with their students by using physical sensitivity as a springboard to an alternative consciousness.

John is the author of several books, notably The Original Body (Handspring 2015). He has published numerous articles for yoga journals, teaches in the UK and internationally, and conducts courses for teachers including the highly successful What Lies Beneath course.

John is based in London and east Sussex where he lives with his wife Lolly Stirk, who is a childbirth activist, pioneer of yoga for pregnancy, and founder member of the Active Birth Movement and Yoga Birth. Their daughter Sarah created the photographic images for this book.