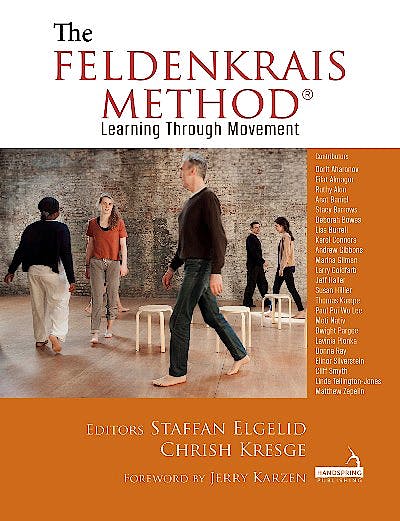 The Feldenkrais Method® Learning Through Movement

Moshe Feldenkrais (1904-1984), the founder of the Feldenkrais Method®, built his Method around the concept of improving human functioning by increasing self-awareness through movement. The concept of neuroplasticity – the brain’s amazing capacity to change and adapt – was one of Feldenkrais’ basic tenets of how the brain organizes movement, and is now in our daily lexicon. Pain, illness and injuries all affect how our nervous system and brain react to events in us and around us. Feldenkrais’ thesis is that our nervous system always does the best it can with the information it has, and learning through the nervous system is the theme that runs through this book. Coverage includes:

Contributors to The Feldenkrais Method®:

Dr Staffan Elgelid PT, PhD, GCFP, RYT-500 is an Associate Professor of Physical Therapy at Nazareth College in Rochester NY. Staffan is a Physical Therapist, Certified Feldenkrais Practitioner and Yoga Therapist. He teaches in yoga therapy programs, conducts workshops nationally and internationally and sees private clients. His main approach with clients is to use smart exercises, movements and lifestyle changes to help them build a nervous system that is robust and agile. This in turn allows them to learn new activities, enhance athletic performance, and withstand the stresses of daily life no matter what their level of activity, age or situation.

Staffan is the co-author of Yoga for Stress and Anxiety and Yoga for Active Adults. He has also produced DVDs on topics such as core training and yoga for sports. Staffan is on the Advisory Board of the IAYT and is a board member of the Yoga Alliance.

Chrish Kresge GCFP is a Guild Certified Feldenkrais® practitioner who works with people of all ages and backgrounds, using movement as the primary tool for improving function, self-awareness, self-image, posture, voice, and overall health. Chrish is also an actor, producer and director. She is passionate about using her diverse skills and background to help people find their optimal selves and innate dignity.

Chrish has been teaching the Feldenkrais Method® across the world for over 21 years in places such as the USA, Ghana, Morocco, France, and Nepal. During her teaching of the Feldenkrais Method, Chrish offers her students an enriching experience consisting of mental and physical improvement through natural, easy, and pleasurable ways of moving, using the brain’s amazing neuroplasticity to reorganize the body. In both her individual client work and group classes, Chrish employs techniques and principles of the Feldenkrais Method® of somatic education.

In addition to working with performing artists and business executives alike, Chrish specializes in working with children with disabilities, and is a graduate of the Anat Baniel Neuromovement® Method for Children, based on the work of Dr Moshe Feldenkrais.

A long-time actor and theatre director, Chrish has performed in and directed numerous musicals and plays, both in the USA and internationally. She has lived on 4 continents and is fluent in French, German, Italian and Arabic. She is passionate about the rehearsal process.

Chrish maintains an active private practice and teaches 5 weekly group Feldenkrais classes in her studio in Northwest Washington DC. She is also currently studying at the cutting-edge Feldenkrais Training Academy in Seattle with Dr Jeffrey Haller.