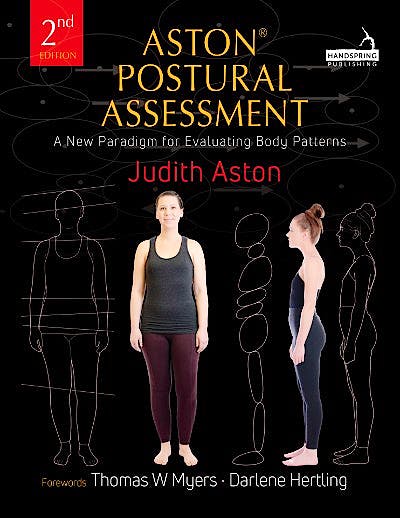 Chapter 3 Seeing Dimension: How length, depth and width of each body segment creates the body’s shape

Chapter 4 Combinations of Alignment and Dimension

This is a brand new edition of a successful book which was one of the first to encourage movement therapists and bodyworkers to look at the postural causes of movement problems, rather than focusing treatment just on the physical symptoms. The book explains how to measure and assess posture and provides tools for doing so. The author introduces her unique perspective on body mechanics – Aston-Mechanics® – a departure from the standard model of body posture, and provides many opportunities to practice observation and analytical skills based on this paradigm.

Judith Aston-Linderoth is widely recognized as a pioneer in the art and science of kinetics for her discovery of the Aston® paradigm and consequent development of Aston® Kinetics. Aston Kinetics is an educational system of movement, bodywork, ﬁtness, and ergonomics that aims to treat each person’s body as unique and customizes the work to match. Rather than enforcing physical symmetry, Aston Kinetics seeks to recognize which asymmetries are natural to a person’s body and how to maximize their use when needed. Early in her career, from 1963 to 1972, Aston taught movement, physical education, and dance for performing artists and athletes at Long Beach Community College. In 1968, at the request of Dr. Ida Rolf, she developed the movement education program for Rolﬁng SI and taught this program for nearly a decade. Aston is an author, inventor of an array of ergonomic products, and creator of movement and bodywork programs. She continues to teach Aston Kinetics training and certiﬁcation courses.