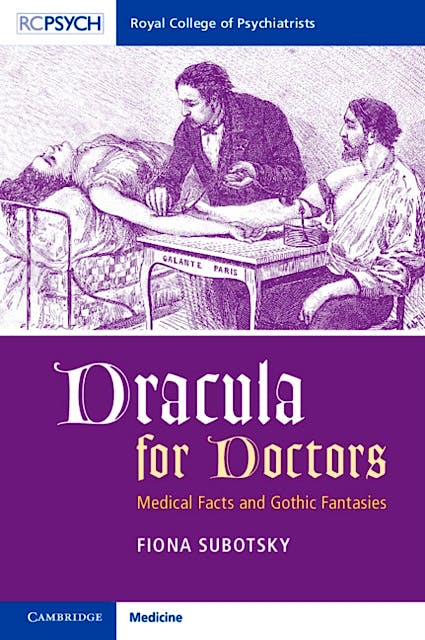 Exploring how medicine and psychiatry are portrayed in gothic literature, this engaging book illustrates how Stoker's famous work was influenced by nineteenth-century attitudes to disease and medicine and reveals many previously unknown links. Extracts from many sensational stories of the time are presented, and the role of doctors and their appearance and contribution to gothic fiction is investigated. The book covers topics such as asylums, their purpose, practice and patients, deadly diseases echoing the symptoms of vampirism, and the otherworldly allure of the undead. Dracula for Doctors is an entertaining and informative examination of how Victorian medical knowledge and culture informed Stoker's gothic masterpiece. This book suggests that Stoker, who had many medical connections, was able to link lurid stories of operations and asylums with fictional horror and suspense. Fans of gothic literature, as well as those of medical history and the supernatural, will find this an enjoyable read.

Fiona Subotsky, South London and Maudsley NHS Foundation Trust
Fiona Subotsky, Fellow of the Royal College of Psychiatrists, has held the posts of Medical Director of the Maudsley Hospital in London, Honorary Treasurer and Honorary Archivist of the Royal College of Psychiatrists, and President of the Medical Women's Federation. Apart from her professional achievements she has had a long-standing interest in history and literature and their medical connections, and has written and lectured extensively on related topics.