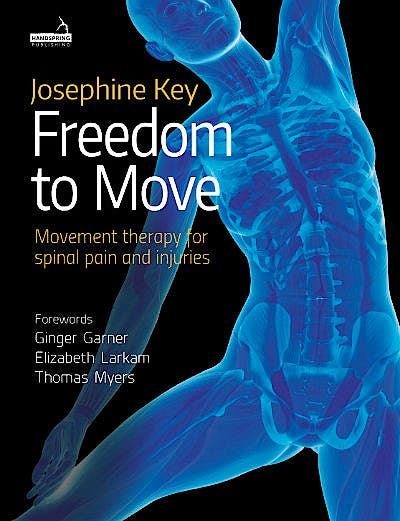 Freedom to Move. Movement Therapy for Spinal Pain and Injuries

Chapter 1 The spine: Its role in movement and musculoskeletal pain
Chapter 2 The vertebral axis: A marriage between biotensegrity and neuro-motor control
Chapter 3 Defining the problem: What goes wrong in the spine that leads to pain?
Chapter 4 The Key Fundamental Patterns of the torso: The basic movements supporting healthy spinal control

Part B Getting to work re-building enhanced spinal movement control

Freedom to Move integrates applicable contemporary science around spinal movement and pain with clinical evidence and understanding gleaned from the author’s longstanding practice (as both a manual and movement therapist). It also includes further insights gained from wide ranging enquiry around spinal movement control in health and dis-ease. This includes exploration of various movement approaches – in particular Feldenkrais, Pilates and the long-term practice of yoga. The book also relates functional movement to the fascial system and the concept of biotensegrity.

The book briefly examines the relationship between healthy torso structure and functional control – and the functional connections between the spine, head and proximal limb girdles – and between the nervous, muscular and fascial systems in providing joint protection, support and control – significant in the spine due to its multi-segmented nature and richly endowed neural networks.

In particular it focuses upon the distilled basic movements that underpin healthy movement – the Key Axial Fundamental Patterns of control.

The bulk of the book’s real estate offers an informed, reasoned, practical therapeutic exercise/movement approach aimed at directly redressing the common deficits and functional movement faults found in people with spinal dysfunction. This is a neuro-myo-fascial approach to correcting movement behaviour whereby in general, restoring control of basic natural functional movement patterns not only remedies the person’s pain but also improves their general functioning and well-being. While some of these exercises may be familiar to practitioners, the suggested adjustments and fine tuning will usually not be common practice.

Exercising for fitness may work counter to building healthy patterns of spinal control in some – they develop spinal pain and injuries. Hence, the book also evaluates the rationales behind commonly prescribed exercises within the various arms of both the therapeutic and movement fitness industries – for both the positive aspects they offer in providing healthy movement – and the pitfalls which may in fact compromise spinal health.

This model of movement therapy for spinal health is applicable within all industry models of teaching movement – both therapeutic and those within the fitness industry including Pilates and Yoga – and the gyms – for prevention and promoting health as well as well-being of the spine in exercise programmes in general.

Josephine Key is a neuro-musculo-skeletal physiotherapist with over 45 years in clinical practice – of which the last 30 years or so have been devoted to seeking a better understanding of the spine in health – and its dis-ease. She gained a Post Graduate Diploma in Manipulative Therapy from Sydney University in 1984.

The evolution of her model of care, The Key Moves® Programme of Therapeutic Exercise and Movement, is the result of evaluating and integrating the available movement and neuroscience; the ample evidence gleaned from clinical practice; the exploration and evaluation of various movement disciplines (Body Mind Centering; various forms of Yoga; Somatics; Feldenkrais; Pilates; Gyrotonic, streams within the fitness industry) – for what they offer in terms of healthy spinal control – or otherwise. Josephine is increasingly exploring the felt sense of movement and the ability to exploit neuro-plastic change – ‘retraining our brain’ to organise healthier movement patterns and better biomechanics.

She has developed and continues to refine classes for spinal health – to help clients move without pain and gain enhanced function. Presently, her practice conducts over 40 ‘Key Moves’® classes a week. This unique programme has been running for over 16 years. Central to it is the re-establishment of important key Fundamental Patterns of Control – which also provide a vehicle to access restrictions in the fascial system, help to rebalance the muscular and nervous systems and restore optimal joint and soft tissue loading, It represents a paradigm shift for exercise therapy for the spine – both therapeutic and preventative.

Josephine has had a number of papers published on her work in the international peer reviewed journal, Bodywork and Movement Therapy. Her paper “The Core: Understanding it and retraining it’d dysfunction” was one of the journal’s five most downloaded papers in 2014.

She is the author of the text book BACK PAIN: A movement problem. A clinical approach incorporating relevant research and practice – published by Elsevier, Edinburgh in 2010.

She has presented at the International World Congress on Low Back and Pelvic Pain in 2007, 2010 & 2013; the Fascia Research Congress in 2009, 2012 & 2015; The Physiotherapy New Zealand Conference 2014. She conducts workshops nationally and internationally for physiotherapists and interdisciplinary manual therapists and movement teachers.