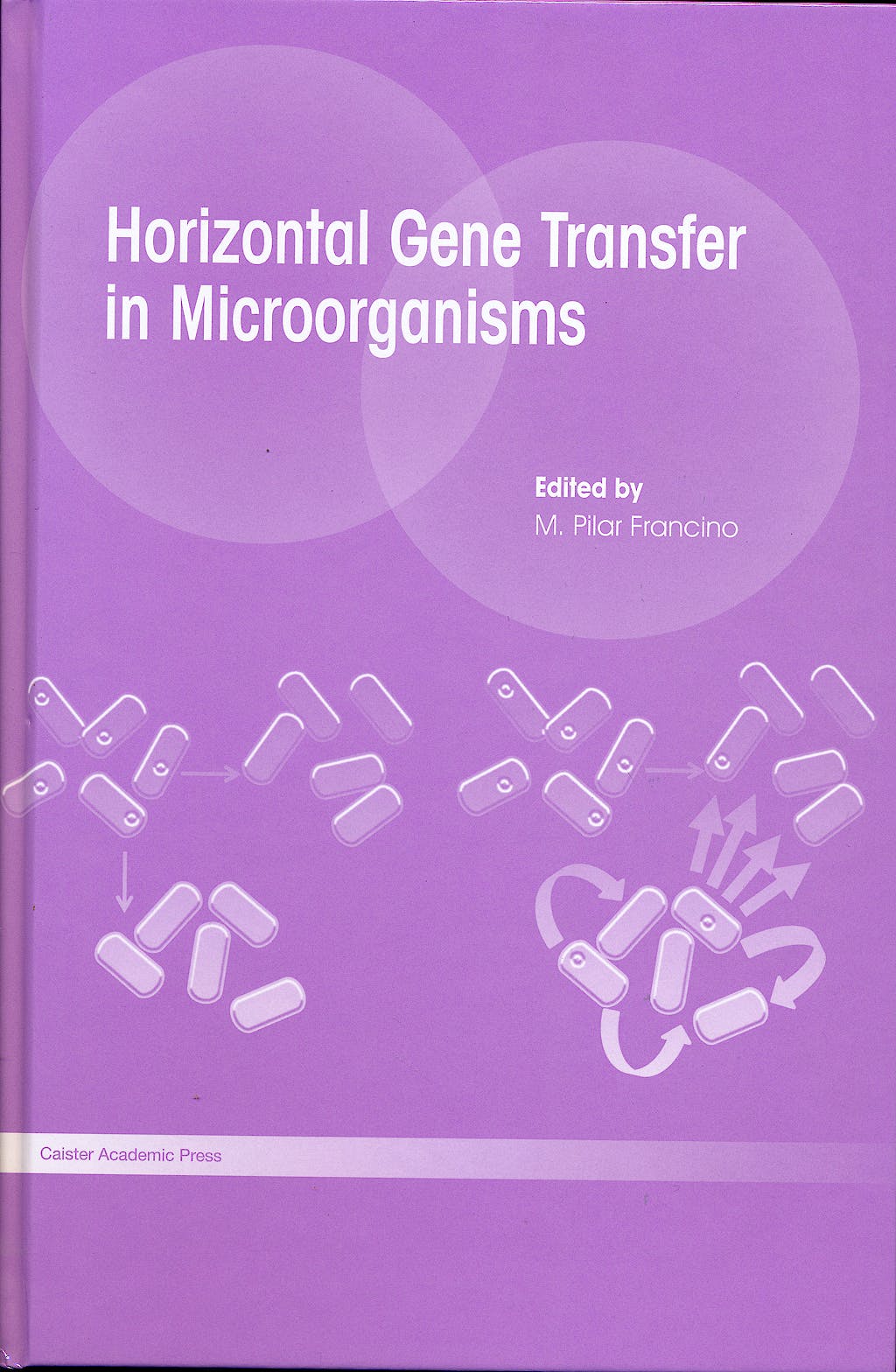 There is a growing awareness that horizontal gene transfer (HGT) is a highly significant phenomenon amongst single-celled organisms. The evolution of bacteria and archaea most often results from the acquisition of new genes through horizontal transfer rather than by modification of vertically inherited genes. Horizontal or lateral gene transfer is a major factor in the spread of bacterial antibiotic resistance and other adaptive traits of microorganisms and is particularly significant in microbial communities. HGT may also play a substantial role in the emergence of novel infections and opportunistic pathogens.

Aimed primarily at research scientists, graduate students and other experts, this book is a major resource for anyone interested in horizontal gene transfer, microbial evolution or antibiotic resistance in bacteria. A recommended book for all microbiology laboratories.

Chapter 1
Gene Survival in Emergent Genomes
M. Pilar Francino
As genome sequences have accumulated for closely related bacteria, our view of bacterial genomes has radically changed. Genome comparisons have demonstrated that little 16S sequence divergence can be accompanied by large differences in total gene repertoire, and even populations of a single 16S rRNA species are made up of vast numbers of genomic varieties. Much of the observed variation among closely related genomes is attributable to gains and losses of genes that are acquired horizontally, in addition to genomic rearrangements, including gene duplications. The genomic flexibility that results from these mechanisms certainly contributes to the ability of bacteria to survive and adapt in varying environmental challenges. However, the duplicability and transferability of individual genes imply that natural selection should operate, not only at the organismal level, but also at the level of the gene. Therefore, it can be argued that genes are semiautonomous entities capable of responding to natural selection at different levels: selfishly, because they can "reproduce" by duplication and "migrate" by Horizontal Gene Transfer (HGT), and cooperatively, because their long-term survival depends on their ability to be replicated as parts of integrated, emerging genomes. The extent of gene autonomy, or the tightness of the association between gene and genome, can greatly vary, mostly depending on the relative strengths of the selective processes acting at each of these two different, but directly related, levels of organization.

Chapter 2
Evolution of Prokaryotic Pangenomes
Florent Lassalle and Vincent Daubin
Since the discovery of the two ancient "kingdoms" of Bacteria and Archaea, molecular biologists have been constantly revising their perception of the abundance and variety of microbial life, and the processes driving their evolution. In the last years, genome sequences from closely related species and strains of the same species have revealed a yet unforeseen diversity of gene repertoires, much larger than could have been predicted by their morphologies or biochemical capabilities. The origins and the functional significance of these differences still need to be understood, and the techniques to address these questions have yet by large to be invented. In this chapter, we will present a review of the current knowledge on the mechanisms responsible for the diversity of gene repertoires in prokaryotes.

Chapter 3
Horizontal Transfer of Host-adaptability Systems in Bacteria
Eva C. Berglund and A. Carolin Frank
Understanding the origin, evolution, maintenance, and breakdown of host-adaptation is central to diverse areas such as human health and agriculture. Horizontal gene transfer (HGT) is a recurrent theme in the evolution of host-adaptability systems. Why are these genes often successfully transferred and what is the consequence for the recipient genome? Drawing examples from the mammal-adapted bacterium Bartonella, and from plant-adapted rhizobia, we discuss the role of horizontal gene transfer in the evolution and ecology of host-adaptation.

Chapter 4
Barriers to Horizontal Gene Transfer: Fuzzy and Evolvable Boundaries
Fernando González-Candelas and M. Pilar Francino
The existence of numerous types of barriers to Horizontal Gene Transfer (HGT) is well documented. Nevertheless, no barrier is impervious, and all kinds of genes can occasionally find their way into organisms different from the ones in which they evolved. This by no means implies a free flow of genes across taxa, but, rather, the existence of complex networks of loopholes across barriers that could potentially connect all kinds of organisms through gene transfer. Loopholes may be provided by way of a small fraction of the individuals in an otherwise inaccessible population and, if exogenous genes are incorporated into the chromosome, homology-assisted recombination processes may further spread them across wild type individuals. HGT networks should be very fluid, as they depend heavily on fortuitous events and transient circumstances, such as the presence of Mobile Genetic Elements (MGEs) in a potential donor that may extend the transfer network in particular directions. Moreover, HGT networks should be highly evolvable, as a result of 1) the multiplicity of processes with the potential to modulate, modify or alleviate the different barriers to transfer, 2) the constantly changing selective pressures operating on them and 3) the enormous plasticity of MGEs. Finally, HGT networks should be gene-specific, as different genes should have an unequal likelihood of passing through or being incorporated into new genomes.

Chapter 5
The Evolution of Horizontally Transferred Genes: a Model for Prokaryotes
Iñaki Comas and Fernando González-Candelas
Horizontal gene transfer is a pervasive evolutionary process which has developed and is still developing an essential role in shaping biodiversity through providing opportunities for innovation, moving determinants of functions among taxa, opening opportunities for colonization of new niches, or acting as a catalyst for adaptation. However, its importance in evolution has only recently begun to be recognized. Reasons for this relatively late recognition of HGT and its relevance stem from two main sources. One is the availability, or rather the lack thereof, of appropriate information to infer the existence of HGT. This shortcoming has now been widely overcome with the large, and still growing at a very fast rate, number of completely sequenced genomes, which allow for precise phylogenetic reconstructions, along with the deployment of theoretical models necessary for inferring evolutionary events in deep-time. The second source is the appreciation that HGT does not leave an indelible stamp on the transferred genes because these continue evolving under a different genomic, and often ecological, environment which usually act synergistically to erase the initially clear marks that go along with those genes. In this chapter we provide an overview of these processes along with a model proposal that will help to better understand the consequences of the continuous evolution of laterally transferred genes at different evolutionary time-scales.

Chapter 6
The Extent and Regulation of Lateral Gene Transfer in Natural Microbial Ecosystems
Rustam I. Aminov
The importance of horizontal gene transfer (HGT) in bacterial evolution is evident from the retrospective analyses of bacterial genomes, which suggest that a substantial part of bacterial genomes is of foreign origin. Another line of evidence that supports the possibility of rapid adaptation of bacteria through lateral gene exchange is the history of antibiotic use by humans. Within a very brief period of the "antibiotic era" many bacterial pathogens were able to acquire the mechanisms allowing them to withstand the selective pressure of antibiotics. And finally, the field and microcosm studies allowed monitoring HGT events in situ. In this chapter, a brief overview of the milestones of mobile genetic elements (MGEs) research is given, followed by discussion of the conceptual framework development. Then the occurrence and diversity of MGEs as well as the frequencies of HGT in terrestrial, aquatic, intestinal and biofilm communities are described. The role of environmental factors that may affect MGE-mediated HGT in these ecosystems is also discussed.

Chapter 7
What Maintains Plasmids Among Bacteria?
Francisco Dionisio, Teresa Nogueira, Luís M. Carvalho, Helena Mendes-Soares, Sílvia C. M. Mendonça, Iolanda Domingues, Bernardino Moreira and Ana M. Reis
The ubiquity of plasmids in nature contrasts with our ability to understand their maintenance. Despite the ability of plasmids to transfer across different bacterial taxonomic groups and to carry useful genes to bacterial cells, it is unclear which factors are responsible for plasmid maintenance among bacterial populations. In this review, we present several hypotheses aiming at explaining plasmid existence: efficiency of self-transfer, advantageous genes, transitory derepression of conjugative pili synthesis, compensatory mutations, the existence of amplifier strains, positive epistasis between chromosomal mutations and plasmids, selective sweeps, frequent cross-species transfer, as well as three types of social interactions (exploitation avoidance in the production of public goods, pathogen- or parasite-mediated harmful behavior, biofilm formation). These hypotheses imply that plasmids and their hosts are adaptable to variable conditions and even that plasmids can be irreplaceable under particular circumstances.

Chapter 8
Identification of Mobile Genetic Elements in Metagenomes
Peter Mullany and Adam P. Roberts
Mobile genetic elements are discrete segments of nucleic acid that can translocate from one part of the genome to another, and in the case of conjugative elements between genomes in different cells. The vast majority of our knowledge of mobile genetic elements is derived from experimentation on cultivable bacteria and is therefore incomplete. In this chapter we will discuss the methods available for identifying and isolating these elements from metagenomic samples.

Chapter 9
Horizontal Gene Transfer and Recombination in the Evolution of Antibiotic Resistance Genes
Miriam Barlow, Jared Caywood, Serena Lai, Joshua Finley and Chad Swanlund
Recombination is a mechanism that leads to variation in antibiotic resistance genes. We review its importance in the recently emerged nosocomial pathogen Acinetobacter baumannii, where Horizontal Gene Transfer (HGT) and recombination are major sources of variation for resistance phenotypes. We also present our results focusing on the plasmid borne genes of blaCTX-M, ampC and qac. These results show that random point mutations are not the only major source of variants among the plasmid borne genes, but that homologous recombination is a major contributor of gene variants that can likewise add and remove resistance phenotypes from bacterial populations. Further studies of HGT and recombination are therefore important to determine how their effects can be manipulated to control the occurrence of resistance.