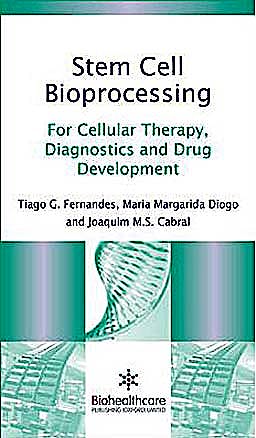 This book describes the main large-scale bioprocessing strategies for both stem cell culture and purification, envisaging the application of these cells for regenerative medicine and drug screening. Bioreactor configurations are described, including their applications for stem cell expansion and/or differentiation. Stem cell separation techniques are also discussed, aiming towards both isolation and purification of rare stem cell populations. For a better understanding of these processes, basic definitions are provided concerning the different types of stem cells, from adult stem cells to the more recent and promising induced pluripotent stem cells. The main characteristics of these different stem cell types are described, alongside the molecular mechanisms underlying their self-renewal and differentiation. The book also focuses on methodologies currently used for in vitro stem cell culture under static conditions, including the challenge of xeno-free culture conditions, as well as culture parameters that influence stem cell culture. Novel approaches for both stem cell culture and separation in micro-scale conditions are presented, including the use of cellular microarrays for high-throughput screening of the effect of both soluble and extracellular matrix molecules and the use of microfluidic devices for both stem cell culture and separation. A further section is dedicated to application of stem cells for regenerative medicine including on-going clinical trials.

• Maintains a unique focus on both the basic stem cell biology concepts, and their translation to large-scale bioprocessing approaches
• Envisages the use of stem cells in regenerative medicine and drug screening applications
• Takes a novel approach towards the use of bioreactors for stem cell expansion and differentiation on a large scale, and the rational integration with bioseparation techniques aiming towards the development of cost-effective large-scale bioprocesses
• Discusses the application of microscale techniques as a tool to perform basic stem cell biology studies
• Considers the application of these new technologies towards drug screening and toxicity studies using stem cell-derived cells

The book is a valuable resource for graduate students, particularly within cell and tissue engineering courses, and also bioprocess engineering and cellular engineering courses. Researchers in academia and industry, clinicians and industrial professionals will also find the book of use. In addition, the book is relevant to students at an undergraduate level, and to teachers in the field.

Fernandes, Tiago G. Dr, Diogo, Maria Margarida Dr and Cabral, Joaquim M.S. Professor
Dr. Tiago G. Fernandes is currently a Post-doctoral research fellow at the Institute for Biotechnology and Bioengineering, Lisbon, Portugal. His research interests are focused on the development of artificial cellular niches for studying the mechanisms that affect human stem cell pluripotency, and aim at contributing to a better understanding of the cellular and molecular events that regulate stem cell functions. During his doctoral studies he also worked at the Rensselaer Polytechnic Institute, NY, USA, in the development of microscale platforms for high-throughput studies of stem cell fate. His work has earned him the prestigious Malcolm Lilly award, presented to a promising young scientist or engineer working in the biochemical engineering field, at the 7th European Symposium on Biochemical Engineering Science (2008). Dr. Fernandes is currently involved in several research projects financed by the Portuguese Foundation for Science and Technology (FCT), as well as by the European Community, related to the development of different systems for pluripotent stem cell culture envisaging further applications in regenerative medicine and drug screening.

Dr. Maria Margarida Diogo received her PhD degree in Biotechnology from Instituto Superior Técnico from January 2000 to April 2004. Her thesis was dedicated to the development of Bioprocesses for Production and Purification of Plasmid DNA for Gene Therapy and DNA vaccines. As a result of this work, a United States Patent was published in 2007. From April 2004 to March 2008 she received a post-doctoral fellowship to work in the field of Stem Cell Bioengineering and she is presently a Research Scientist at the Stem Cell Bioengineering Laboratory at Instituto Superior Técnico. She is involved in several research projects financed by the Portuguese Foundation for Science and Technology (FCT) as well as by the European Community related to development of large-scale bioprocessing strategies for human Induced Pluripotent and Neural Stem Cell culture and purification envisaging further applications in regenerative medicine and drug screening. As a complementary approach, she is the Principal Investigator of a project for development of microscale technologies for stem cell culture.

Dr. Joaquim M.S. Cabral is Professor of Biological Engineering, in the Department of Bioengineering at Instituto Superior Técnico (IST), Technical University of Lisbon, Portugal. He was the founder and current Head of Department of Bioengineering, and the Director of the Institute for Biotechnology and Bioengineering, a Research Laboratory Associated to the Ministry of Science, Technology and Higher Education in Portugal. He obtained his Diploma in Chemical Engineering from IST in 1976. His Ph.D. and 'Habilitation' degrees in Biochemical Engineering were obtained from IST in 1982 and 1988, respectively. After a post-doctoral study at Massachusetts Institute of Technology in 1983-1984, he joined IST Faculty as Assistant Professor and became a Full Professor in 1992. Joaquim Cabral's research aims at contributing for biochemical engineering science through novel developments in Bioprocess Engineering and Stem Cell Bioengineering. Stem Cell Bioengineering interests address the ex-vivo expansion and controlled differentiation of stem cells in bioreactor systems, using Hematopoietic stem cells (HSC), mesenchymal stem cells (MSC) and embryonic stem cells (ESC) as model systems. He is member of several Editorial Boards of scientific journals and of Organizing and Scientific Committees of conferences in the areas of Biotechnology and Stem Cells, Tissue Engineering and Regenerative Medicine. He has published over 370 research papers and co-authored or edited six books.

He was member of the Section on Applied Biocatalysis of European Federation of Biotechnology (EFB), since 1986 until 2005 and Chairman of this Section from 1991 until 1996. In 2005, he was nominated Honorary Member. He was also member of Executive Committee of the EFB Section on Biochemical Engineering Science from 1999 until 2004. He serves as a member of several Advisory Boards including the Biotechnology Strategy Group of the European Academies' Science Advisory Council (EASAC), The Royal Society (2002-2005), the Expert Panel of the Engineering and Physical Sciences Research Council, UK (2006-2012), the Expert Panel of Biotechnology and Biological Sciences Research Council, UK (1995-2005), the International Peer Review Committee of the B-Basic Program, Advanced Chemical Technologies for Sustainability, NWO, The Netherlands, (2004 -2007) and currently is the President of the Exact Sciences and Engineering Scientific Council of the Portuguese Foundation for Science and Technology (since 2009).