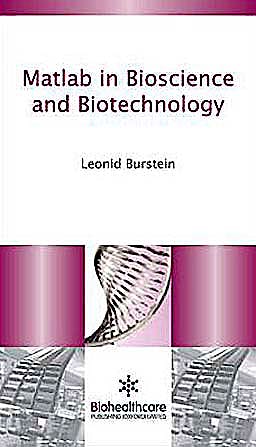 Matlab in Bioscience and Biotechnology

This book presents an introductory Matlab course oriented towards various collaborative areas of biotechnology and bioscience. It concentrates on Matlab fundamentals and gives examples of its application to a wide range of current bioengineering problems in computational biology, molecular biology, bio-kinetics, biomedicine, bioinformatics, and biotechnology. In the last decade Matlab has been presented to students as the first computer program they learn. Consequently, many non-programmer students, engineers and scientists have come to regard it as user-friendly and highly convenient in solving their specific problems. Numerous books are available on programming in Matlab for engineers in general, irrespective of their specialization, or for those specializing in some specific area, but none have been designed especially for such a wide, interdisciplinary, and topical area as bioengineering. Thus, in this book, Matlab is presented with examples and applications to various school-level and advanced bioengineering problems - from growing populations of microorganisms and population dynamics, reaction kinetics and reagent concentrations, predator-prey models, mass-transfer and flow problems, to sequence analysis and sequence statistics.

• This is the first book intended as a manual introducing biologists and other biotechnology engineers to work with Matlab
• It is suitable for beginners and inexperienced users; however, applications of Matlab to advanced problems such as the Monte Carlo method, curve fitting, and reliable machine diagnostics make the book relevant to university teachers as well
• The book is different in that it assumes a modest mathematical background for the reader and introduces the mathematical or technical concepts with a somewhat traditional approach; Matlab is then used as a tool for subsequent computer solution
• The book contains a variety of examples from widely different areas of modern bioscience and technology. It offers bio-applications from biomechanics to biotechnology hitherto unavailable in one volume

The book is addressed equally to undergraduate and graduate students and to practicing biotechnologists. It is aimed towards biotechnology students and non-programmers using Matlab for the first time, as well as instructors and their audiences in courses where Matlab is used as a supplementary but necessary tool, and participants in advanced biotechnology courses, seminars or workshops where Matlab is taught. Scientists who seek to solve specific bio-scientific problems and search for similar problems solvable by Matlab will also find the book of interest, as may self-instructing readers, as a means of quick mastering of Matlab for their needs.

The author is based at Technion, Haifa University, and at the Braude ORT College (Biotechnology Department and Computer Engineering Department). He is author of chapters in published scientific books and is an Editorial Board member and reviewer for a number of international scientific journals. His achievements have also been reported in more than 50 publications in leading scientific journals.