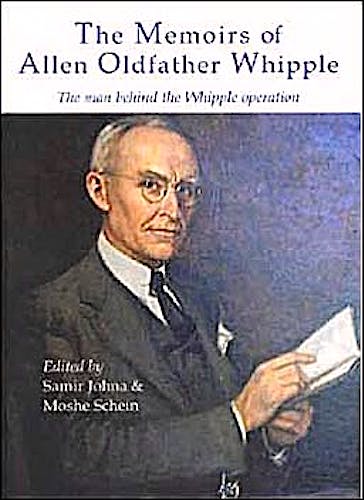 The Memoirs of Allen Oldfather Whipple. the Man behind the Whipple Operation

To the abdominal surgeon a first successful Whipple procedure is what a first combat mission is to the fighter pilot: a symbol of competence -- the fruits of prolonged training. Not many surgeons managed to incorporate their names into a commonly used eponym; Allen Whipple did and so became immortalised as a household name to surgeons world-wide. Yet, little has been known and written about Whipple, the great American surgeon -- the person and his other interests. This is what this book is about: an edited version of Whipple's previously unpublished memories, which until now -- for more than forty years -- has collected dust. In these pages the retired Whipple describes the journey of his life from the very beginning in Persia, where he was born, to the very end in New Jersey where he died. He provides snap shots of himself, his family and friends, his colleagues, and the changing times in which he lived. The editors have abbreviated the original manuscript by a third and have added footnotes and illustrations. An introduction and 'end page' adds perspective to the memoirs. It has been said "God put the pancreas in the back because he did not want surgeons messing with it". Allen Whipple had the courage to mess with the pancreas and to show us how to mess with it successfully. But what kind of man was he and how did he arrive at his achievements? Find out in this book.