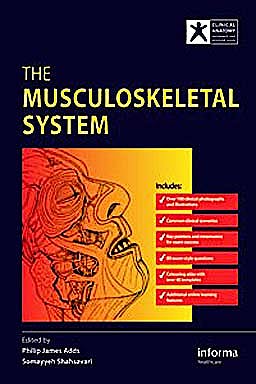 The Musculoskeletal System is an anatomy reference and revision guide, combining detailed illustrations with a strong clinical focus, to allow an easier correlation between anatomy and practice. Illustrated with over 100 anatomical/clinical images and hand-drawn illustrations, and separated in manageable sections by anatomical area, this book provides a compact and complete account of the body’s complex system of bones and muscles whilst also considering joints, ligaments, and innervation.

The Musculoskeletal System is aimed at medical students, on both the standard 5-year and the accelerated 4-year graduate-entry course, and to junior doctors and SHO's/residents in training. It also appeals to related specialties, including sport science, physiology, and biomedical science; in addition to the wider scientific audience.

6. Test Yourself! Exam-style Questions by Philip Adds and Somayyeh Shahsavari

7. Test Yourself! Colouring Images by Philip Adds and Somayyeh Shahsavari

Philip J Adds BSc (Hons), MSc, FIBMS is a Senior Lecturer in Anatomy at St George's, University of London. He is a Fellow of the Institute of Biomedical Science, a Member of Council of the British Association of Clinical Anatomists, and a Member of the Anatomical Society. Mr Adds is an Associate Editor of the Journal of Clinical Anatomy, and Assistant Editor of the Journal of Plastination, and has published numerous works on clinical anatomy.