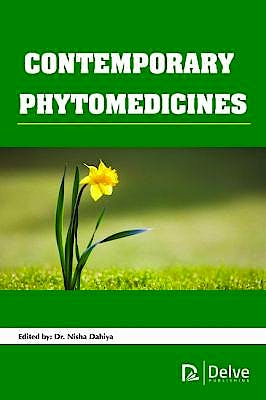 Phytomedicine utilizes plants, plant parts or plant derived phytochemical for their medical qualities to prevent or treat various diseases. Natural compounds have been the principle source of lead compounds historically and recently. Plant derived compounds have demonstrated significant activities against a range of diseases including the most deadly diseases such as cancer.

Certain compounds possess antimicrobial activities such as chloroform extract of Drosera binate. The extract was found to be bactericidal in in vitro cultures against both planktonic forms and biofilms. The extract acted synergistically with silver nanoparticles resulting in enhancement of antibacterial activity, indicating that the extract alongwith nanoparticles can provide effective alternative to commonly used antibiotics. Coadministering of the leaf extract from Hedera helix L., with existing anti-influenza drug oseltamivir increased the anti-viral activity of oseltamivir at suboptimal doses. The leaf extract which contained hedrasaponin F in highest amount, in combination with oseltamivir decreased pulmonary inflammation in PR8-infected mice, and reduced TNF-alpha and chemokine ligand 2 which are inflammatory cytokine and chemokine. The combination also reduced infiltration of bronchial alveolar of infected mice by CD11b+Ly6G+ and CD11b+Ly6Cint.

Natural compounds reportedly have wound healing activity. Liposome formu¬lation of Ligusticum chuanxiong Essential Oil reduced hypertrophic scars on rabbit ears when applied at 2.5, 5 and 10% dosage to the scars for 28 days. Apoptotic markers caspase -3 and -9 levels were significantly increased in the scar tissue, while there was marked decrease in the levels of TGF-?1, MMP-1, collagen I, and collagen III along with the the scar elevation index (SEI). Etha¬nol extract of Mallotus philippinensis bark induces migration of mesenchymal stem cells and improved wound healing in a mouse model and its major compo¬nent cinnamtannin B-1 also augmented migration of mesenchymal cells in vivo and improved wound healing in mice.

Silymarin is a mixture of flavonolignane diastereomers found in Silybum mari¬anum extract. Silymarin induces insulin resistance in normal rats at a dose of 200mg/kg and enhanced insulin resistance in rats fed with fructose rich chow. The results indicated that Silymarin may be used for type-2 diabetic patients as it disrupted insulin signaling through increased PTEN expression.

A number of extracts have been found to be effective against cancer cell lines in vitro and also in xenograft models. Hydroethanolic Iberis amara extract (IAE) was found to demonstrate anticancerogenic activity against HT-29 and T84 co¬lon carcinoma cells with an inhibitory concentration (IC50) of 6 and 9 ?g/ml respectively and against PC3 prostate cancer and MCF7 breast cancer cell lines. An anti-fungal eugenol, which is derived from the buds of Syzygium aromaticum, was demonstrated to interfere with Tat1p and Gap1p permeases which are involved in transport of aromatic and branched chain amino-acids in the yeast cytoplasmic membrane, which may also contribute to amino acid starvation of the cells and maybe used for cancer therapy. Eruthrodiol and Uvaol, naturally occurring triterpenoid alcohols, reduced cell proliferation and affected the cell cycle phases of 1321N astrocytomas (brain cancer cells), along with induction of cell death. Exposure of the cancer cells to Eruthrodiol and Uvaol caused pro¬duction of reactive oxygen species and resulted in loss of mitochondrial transmembrane potential and activated the c-jun-N-terminal kinases. Crude extract of Withania somnifera roots when tested against human malignant melanoma A375 cells reduced cell viability, caused nuclear blebbing and DNA fragmenta¬tion indicating its cytotoxic effects on the malignant cells.

Certain plant extracts have been demonstrated to have hepatoprotective proper¬ties. Pre-administration of Polydatin, one of the main compounds in Polygo¬num cuspidatum, for 5 days reversed carbon tetrachloride induced liver injury. The effect was evidenced by reversal in the increased serum levels of aspartate aminotransferase (AST), alanine aminotransferase (ALT) and hepatic malo¬ndialdehyde (MDA) and expression of hepatic tumor necrosis factor-alpha), interleukin-1 beta (IL-1?), cyclooxygenase-2 (COX-2), inducible nitric oxide synthase (iNOS) and nuclearfactor-kappa B (NF-?B). These results confirmed hepatoprotective activity of Polydatin and indicate that it may be used as a candidate for oxidative stress and inflammatory diseases treatment.

Plant extract or their derivatives are known to have immune-modulatory properties. Oenothein B, a polyphenol isolated from Epilobium angustifolium, was demonstrated to stimulate innate and anti-tumor immunity by increasing the production of IFN? alone or along with interleukin-18 in both bovine and human natural killer cells.

Dr Nisha Dahiya is serving as a Research Scientist at the Indian Institute of Medical Sciences, New Delhi, India. She completed her PhD in 2014 from University of Camerino, Italy, under the Malaria and Human Development Program, which was supported by World Health Organization, Global Malaria Program. Her main interests are drug discovery for infectious diseases and surveillance and molecular epidemiology of rising drug resistant pathogens. Currently, she is assisting in the coordination of national network for surveillance of anti microbial resistance through out the country.