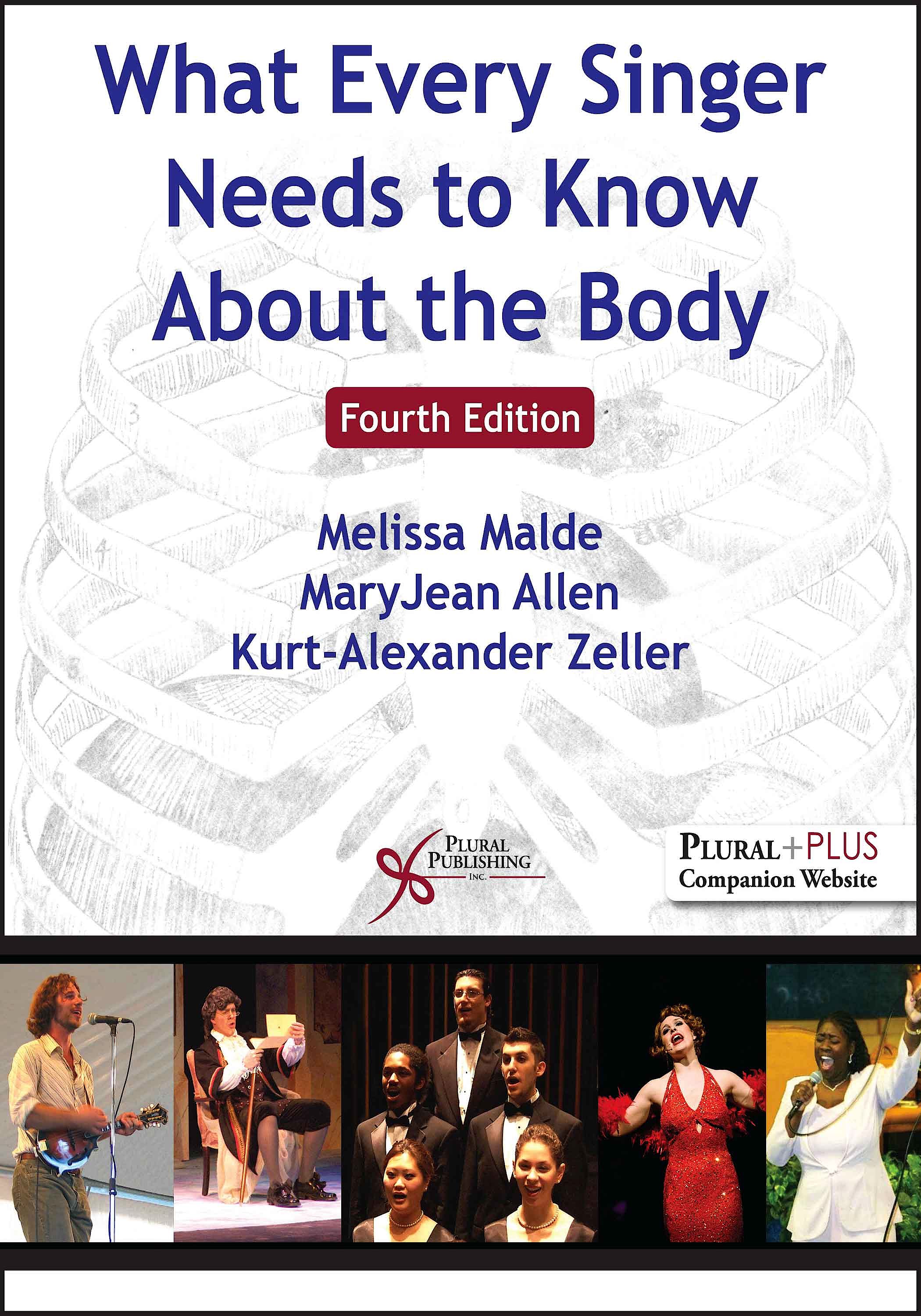 What Every Singer Needs to Know About the Body

How to Use This Book by Melissa Malde

Chapter 2. The Core of the Body and the Places of Dynamic Balance

Chapter 6. Singing as Communication: Mapping the Structures of Articulation

Appendix A. What to Do About Performace Anxiety

Appendix B. The Scientific Basis of Body Mapping

What Every Singer Needs to Know About the Body, Fourth Edition gives singers and teachers a Body Mapping resource—from anatomy and physiology to body awareness—that helps them discover and correct misconceptions about how their bodies are designed and how they function. This book provides detailed descriptions of the structures and movements necessary for healthy and efficient body awareness, balance, breathing, phonation, resonance, articulation, and gesture. Many voice books focus on the anatomical facts, but leave singers asking, "How can I apply this to my singing?" What Every Singer Needs to Know About the Body helps to answer that question, providing practical exercises and detailed illustrations.

What Every Singer Needs to Know About the Body comes with access to a PluralPlus companion website with audio and video recordings of the exploratory exercises.

This book provides the technical foundation for singers of all styles. The authors do not espouse a single method or attempt to teach singing techniques or styles. Rather, they describe the movements of singing with accuracy and detail so that singers may experiment on their own and communicate with each other in a common language.

Review of the Previous Edition

"In my college days (before GPS phone apps) I would regularly buy new maps of the states between school and home in the hopes of finding a route that would shave some time off the multi-hour drive. Having taken wrong turns, encountered unexpected construction, and muddled my way through confusing directions from local gas station attendants, I understood the importance of a detailed, up-to-date road map.

The same can be said of Body Mapping. Even for those of us who have been singing for years, if our mental conceptions of how our bodies function are contrary to biological reality, our singing efficiency may suffer. Melissa Malde, MaryJean Allen, and Kurt-Alexander Zeller dispel many of these misconceptions in their book What Every Singer Needs to Know About the Body. Its already matchless information has recently been further enhanced, expanded, and elaborated upon in a new third edition.

The most significant additions are the extensive and meticulously compiled online resources, which are practically an entire course unto themselves. The chapter-by-chapter guided exercises, demonstrations, and testimonials appear on a companion website as video and audio clips, most of which feature the authors as narrators and test subjects.

These in-house resources, which are unique to this book, are supplemented by numerous outside sources, cited throughout the book and collected on the "web resources" document found on the website. Even more web content has been promised as it becomes available.

The authors write that no book can serve as the final word on the subject of Body Mapping since continued brain-body research is ongoing and ever evolving. With this in mind, the online component may replace the need for further editions of the book, as new information may be added to the website or updated as necessary.

Just as GPS apps undergo system updates to incorporate new roads and to better locate the smoothest path from point A to point B, the third edition of What Every Singer Needs to Know About the Body provides information on Body Mapping that is more current and extensive than that of the previous editions. Authors Malde, Allen, and Zeller have created and compiled a vast array of new instructional resources that complement and reinforce the information from the text, further uncovering the physical awareness and freedom needed for effective and enjoyable singing."
—Brian Manternach, University of Utah, Musical Theatre Program, in Classical Singer (December 2017)

Melissa Malde, DMA, is a licensed Body Mapping Educator and performs regularly in opera, concert, recital, and musical theater. She holds degrees from Oberlin College and Conservatory, Northwestern University, the College-Conservatory of Music of the University of Cincinnati, and the Hochschule für Musik in Munich, where she studied under the auspices of a German Academic Exchange grant. While in Munich, she won first prize in the Kulturforum Competition. Other honors include winning CCM’s Concerto Competition, the Sudler Oratorio Competition and a Farwell Award in Chicago, and the Brice-Gooter Award at the NATSAA competition. She has presented academic papers, lecture recitals, and clinics nationwide, and is a professor of voice and vocal pedagogy at the University of Northern Colorado.

MaryJean Allen, MM, AD, is a licensed Body Mapping Educator. She is also a certified Alexander Technique teacher (Alexander Technique—over 100 years old—teaches everyone how to become aware of and how to eliminate habits that interfere with fluid, free movement). MaryJean teaches Body Mapping and Alexander Technique workshops at young artist programs, universities, colleges, high schools, and churches. A veteran private voice teacher for over 30 years, MaryJean has students who sing professionally in classical, music theatre, or pop music venues; other students teach voice or choral music. MaryJean holds a Master of Music degree and an Artist Diploma in vocal performance from the Cleveland Institute of Music and earned a Bachelor of Music degree in vocal performance with a minor in piano performance from Oklahoma City University.

Kurt-Alexander Zeller, DMA, is a licensed Andover Educator and has presented Body Mapping workshops at regional, national, and international conferences. He currently serves as Director of Opera and Vocal Studies and as Coordinator of the Division of Music at Clayton State University in suburban Atlanta, Georgia. He is an active performer of early music and concert repertoire but especially enjoys working as a singer and stage director in all forms of music drama. Dr. Zeller holds undergraduate degrees in music and theater from the Meadows School of the Arts at Southern Methodist University and earned his graduate degrees at the College-Conservatory of Music of the University of Cincinnati. He has completed further studies at the Seattle Academy of Baroque Opera, the Early Music Institute of Indiana University, and the 1995 National Association of Teachers of Singing Internship program.