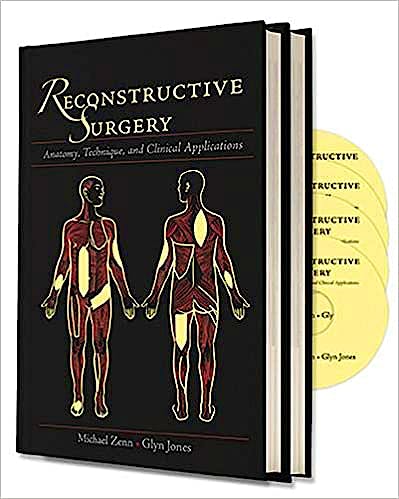 Find Answers to Your Reconstructive Questions in This Comprehensive and Groundbreaking New Work! In this new 2-volume set: Reconstructive Surgery: Anatomy, Technique & Clinical Applications, Drs. Zenn and Jones pay full deference to Mathes and Nahai's original contribution to the field while taking it to the next level, adding their own considerable expertise to this topic. The authors are assisted by a select group of internationally recognized contributors who provide expert commentary and clinical cases on each flap. Together these leading surgeons share their vast experience and clinical insights on techniques for reconstructing all anatomic regions. The result is a virtual goldmine of valuable information, tips and tricks, and step-by-step operative detail. This is the definitive text in reconstructive surgery!

Superbly Illustrated: The educational value of this 2-volume work is enormously enhanced by the superb medical illustrations that grace its pages. The book has beautiful artwork that elegantly depicts important flap anatomy as well as the step-by-step surgical technique that is included for each of the operations that are described.

Comprehensive Coverage: Volume one begins with a section on Fundamentals that includes 4 key chapters. The first is an introduction to the book's organization to guide the reader through the various sections. The second chapter, contributed by Steven Morris, discusses the vascular basis of flaps and includes a flap classification. The third chapter focuses on Basic Principles and Concepts including the use of grafts, flaps, tissue expansion as well as basic information and guidelines on monitoring, wound management, and avoidance and management of complications. The final chapter in this section is entitled Clinical Applications: A Guide to Flap Selection. This unique chapter provides a key to clinical problem solving. It includes a series of tables or regional maps which are organized by clinical problem in each anatomic area providing the optimal reconstructive solutions and fall-back plans for specific problems. This chapter should prove invaluable to any surgeon struggling to find the best approach to solving a difficult reconstructive problem.

Each chapter in this section follows a distinct and consistent format. Beginning with key anatomic landmarks and including vascular anatomy, design and markings, guidelines for dissection, arc of rotation, flap transfer, inset and closure and clinical applications. Each chapter concludes with a box of pearls and pitfalls and commentary provided by a noted expert in this area.

Now More Than Ever, This is the One Reference You Simply Must Own! Like its predecessor, this masterpiece is essential reading for residents and a must for any professional performing reconstructive surgery. Its clear organization, generous use of illustrations and surgical guidance will improve your outcomes with your very next case.