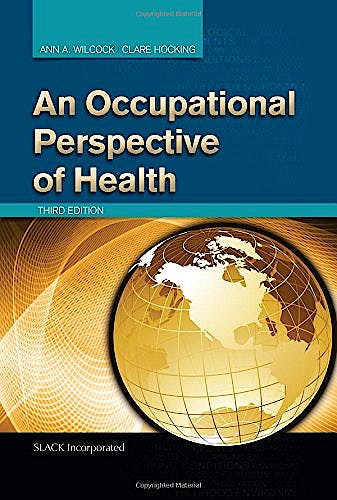 An Occupational Perspective of Health

For nearly 20 years, An Occupational Perspective of Health has been a valuable text for health practitioners with an interest in the impact of what people do throughout their lives. Now available in an updated and much-anticipated Third Edition, this unique text continues the intention of the original publication: it encourages wide-ranging recognition of occupation as a major contributor to all people’s experience of health or illness. It also promotes understanding of how, throughout the world, “population health” as well as individual well-being is dependent on occupation.

At international and national levels, the role of occupation in terms of the physical, mental, and social health of all individuals and populations remains poorly understood and largely overlooked as an inevitable and constant factor. An Occupational Perspective of Health, Third Edition by Drs. Ann Wilcock and Clare Hocking, in line with directives from the World Health Organization (WHO), encourages practitioners of public health, occupational therapy and others to extend current thinking and practice and embrace a holistic view of how occupation and health interact.

Addressed in the Third Edition:

• An explanation of how individual and population health throughout the world is impacted by all that people do
• A drawing together of WHO ideas that relate to health through occupation, and how people individually and collectively feel about, relate to others, and grow or diminish through what they do
• A multidisciplinary orientation to promote health and reduce illness by increasing awareness and understanding of the impact of occupations across sleep-wake continuums throughout lifespans and communities

The connection of health and occupation is held to be fundamental, although ideas about both have altered throughout time as environments and cultures have evolved. To improve interdisciplinary understanding, An Occupational Perspective of Health, Third Edition explains the concepts of attaining, maintaining, or reclaiming population health through occupation.

Instructors in educational settings can visit www.efacultylounge.com for additional materials to be used for teaching in the classroom.

Practitioners and students of occupational therapy, health sciences, and public or population health will benefit from and relate to An Occupational Perspective of Health, Third Edition.

About the Authors
Preface
Introduction

“This stands alone in the field of occupational science and occupational therapy education. No other book so clearly articulates how human occupation is the crux of the continued sustainability and stewardship of our planet. The third edition is thoroughly essential for 21st century conceptualizations of health and wellness.” -Carla Wilhite, OTD, OTR/L, Doody’s Book Review Service

Ann A. Wilcock (née Ellison), PhD, BAppScOT, GradDipPh, FCOT, was born in the United Kingdom and was brought up in the Lake District. She graduated as an occupational therapist from the Derby School in 1961, and worked at Black Notley Hospital and Farnham Park Rehabilitation Centre before going to live in Australia in 1964. There she worked in large general hospitals in New South Wales and Tasmania in a variety of fields, including mental health, orthopedics, geriatric medicine, and neurology. After many years as a practitioner, Ann moved into the academic sphere, eventually becoming Head of the School of Occupational Therapy at the University of South Australia, Adelaide, Australia, in 1987. Her graduate and doctoral studies have been in the field of public health at the University of Adelaide, Australia. Her formal academic career culminated in her appointment as Founding Professor of Occupational Science and Therapy at Deakin University, Victoria, Australia. Other appointments have included Doctoral Supervision at Auckland University of Technology, New Zealand; Visiting Professor at Brunel University, Uxbridge, England, UK; Adjunct Professor at Dalhousie University, Halifax, Nova Scotia, Canada; Charles Sturt University, Albury, Australia; and currently, the University of Canberra, Canberra, Australia.

Clare Hocking, PhD, MHSc(OT), AdvDipOT, DipOT, was born and raised in New Zealand, sheltered by the hills of the Hutt Valley. Her early working life included periods as a clerical worker and time on the factory floor, inspecting components for telephone exchanges. Those experiences sharpened her sense of social justice, even before she knew that terminology. Clare completed a Diploma in Occupational Therapy in 1982, then an Advanced Diploma in Occupational Therapy in 1989, both from the Central Institute of Technology in Heretaunga, New Zealand. In her first occupational therapy post in Christchurch, New Zealand, Clare gained experience in medical wards for older adults, long-stay wards for adults with profound musculoskeletal and neurological impairments, and with brief spells in hand therapy and burns wards. A move to Auckland, New Zealand in 1985 brought new opportunities running a vocational rehabilitation service for people recovering from traumatic brain injury, stroke, and multiple physical injuries, followed by a range of positions at one of Auckland’s large psychiatric hospitals.