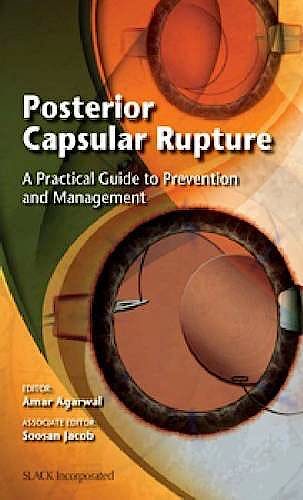 Posterior Capsular Rupture. a Practical Guide to Prevention and Management

Dr. Amar Agarwal and his contributors, leading international ophthalmic surgeons, discuss the latest techniques in easy-to-understand text and format and include more than 275 high-quality photographs that enhance reader comprehension.

Posterior Capsular Rupture: A Practical Guide to Prevention and Management presents a variety of complicated cases and complications such as posterior polar cataracts, IOL scaffold and glued IOL, sutured IOLs, management of dislocated IOLs, and corneal damage and posterior capsular rupture, to name a few.

Additionally, a video Web site accompanies Posterior Capsular Rupture: A Practical Guide to Prevention and Management and allows readers to gain a better understanding of the subject. As a bonus, readers will be able to submit questions and receive clinical answers from Dr. Agarwal through the video Web site.

Practicing ophthalmologists, residents, and post graduate students alike will benefit from this book’s clear portrayal of this difficult medical issue.

Amar Agarwal, MS, FRCS, FRCOphth is the Chairman and Managing Director of Dr. Agarwal’s Group of Eye Hospitals and Eye Research Centre in India, which includes 55 eye hospitals; President of the International Society of Refractive Surgery (ISRS); and Secretary General of the Indian Intraocular Implant and Refractive Society (IIRSI).
Dr. Agarwal is the pioneer of phakonit, which is phacoemulsification with needle incision technology. This technique became popularly known as bimanual phaco, microincision cataract surgery (MICS), or microphaco. He is the first to remove cataracts through a 0.7-mm tip with the technique called microphakonit. He also discovered no-anesthesia cataract surgery and FAVIT, a new technique to remove dropped nuclei. The air pump, which was a simple idea of using an aquarium fish pump to increase the fluid into the eye in bimanual phaco and coaxial phaco, has helped prevent surge. This built the basis of various techniques of forced infusion for small-incision cataract surgery. He also discovered a new refractive error called aberropia.

He was also the first to perform a combined surgery of microphakonit (700-micron cataract surgery) with a 25-gauge vitrectomy in the same patient, thus creating the smallest incisions possible for cataract and vitrectomy. He was also the first surgeon to implant a new mirror telescopic intraocular lens for patients suffering from age-related macular degeneration (AMD). He also was the first in the world to implant a glued intraocular lens (IOL), whereby a posterior chamber IOL is fixed in an eye without the capsule using fibrin glue. The Malyugin ring (MicroSurgical Technology, Redmond, WA) for small-pupil cataract surgery was also modified by him as the Agarwal modification of the Malyugin ring for miotic pupil cataract surgery with posterior capsular defects. Dr. Agarwal’s Eye Hospital has also, for the first time, performed an anterior segment transplantation in a 4-month-old child with anterior staphyloma. The turnaround technique for intrastromal ring segments being managed if passed through a false channel creation as well as the glued endocapsular ring for subluxated cataracts has also been started in Dr. Agarwal’s Eye Hospital. Dr. Agarwal pioneered the technique of IOL scaffold in which retained nuclear fragments are emulsified by using a 3-piece IOL as a scaffold in an eye with posterior capsular rupture to prevent the nucleus fragments from dropping into the vitreous. He has combined glued IOL and IOL scaffold in cases of posterior capsular rupture where there is no iris or capsular support in a new technique termed the glued IOL scaffold.

Dr. Agarwal has received many awards for his work in ophthalmology, most significantly, the Casebeer Award, Barraquer Award, and the Kelman Award. His videos have won many awards at the film festivals of the American Society of Cataract and Refractive Surgery (ASCRS), the American Academy of Ophthalmology (AAO), and the European Society of Cataract & Refractive Surgeons (ESCRS). He has written more than 55 books which have been published in English, Spanish, and Polish. Dr. Agarwal also trains doctors from all over the world in the Eye Research Centre on phaco, bimanual phaco, LASIK, and retina. He is a Professor of Ophthalmology at Ramachandra Medical College in Chennai, India. The Web site for Dr. Agarwal’s Eye Hospital is www.dragarwal.com.

Soosan Jacob, MS, FRCS, DNB, MNAMS is a Senior Consultant Ophthalmologist in Dr. Agarwal’s Eye Hospital, Chennai, India. She is a gold medalist in ophthalmology. She has won many international awards for video films and challenging cases at prestigious international conferences such as American Society of Cataract and Refractive Surgery (ASCRS), American Academy of Ophthalmology (AAO), World Ophthalmology Congress (WOC), and the European Society of Cataract and Refractive Surgeons (ESCRS). Dr. Jacon was awarded the prestigious John Henahan award for Young Ophthalmologist given by EuroTimes at the ESCRS Annual Meeting in 2011 and is one of the only 2 two-time winners of the prestigious Golden Apple award for the Challenging Cases Symposium in Cataract Surgery at the ASCRS. Dr. Jacob was also awarded the Special Gold Medal of the Indian Intraocular Implant and Refractive Society (IIRSI). Her videos have been featured videos and selected as Editor’s Choice on the AAO, International Society of Refractive Surgery, Eyetube, and Ocular Surgery News (OSN) Web sites. She is a noted speaker and has conducted courses and delivered lectures in numerous national and international conferences. She has special interest in cutting edge surgical techniques for cataract, cornea, glaucoma, and refractive surgery including intra-stromal ring segments, collagen cross linking, subluxated cataracts, and new refractive solutions.

Dr. Jacob was the first to bring out the concept of anterior segment transplantation, a procedure in which the cornea, sclera, an artifical iris, pupil, and IOL are transplanted en bloc in patients with anterior staphyloma. She also devised a new surgical technique for ptosis in which the sling surgery can be done with a 1-stab incision rather than 3, thus improving the postoperative cosmetic appearance of the patient. She has devised 2 new techniques— the turnaround technique and the double pass turnaround technique for successful completion of femtosecond laser-assisted Intacs implantation in eyes with false channel dissection for both symmetric and asymmetric Intacs segments. She has also described new techniques of relaxing Descemetotomy for tractional Descemet’s detachment and YAG/needle Descemetopuncture for bullous Descemet’s detachment and has proposed a new classification system and treatment algorithm for Descemet’s membrane detachments. She has developed an innovative technique for sutureless fibrin glue-assisted trans-scleral fixation of the capsular bag and its contents using a glued endocapsular ring, which makes safe phacoemulsification in subluxated cataracts possible and provides good intraoperative and postoperative safety and stability. Dr. Jacob won the ASCRS award for this procedure. She has also described a new contact lens-assisted crosslinking (CACXL) technique for use in keratoconic eyes with thin corneas where conventional crosslinking is not possible. In addition, Dr. Jacob described a single stab trabeculectomy technique for easy and rapid trabeculectomy surgery associated with less scarring and no subconjunctival dissection.

Dr. Jacob has written numerous articles and chapters in textbooks published by international and national publishers and she has been listed as the editor for 11 textbooks in ophthalmology. She has written numerous invited articles published in the Ophthalmology press. Her column, “Eye on Technology” is published in EuroTimes, the monthly magazine of the European Society of Cataract and Refractive Surgery. She is amongst the senior faculty for the Diplomate of National Board postgraduate training program and the phacoemulsification and LASIK training program for doctors outside of India. She is an Editorial Board member of the Ocular Surgery News, Asia-Pacific Edition, and an executive committee member of the Indian Intra-ocular Implant and Refractive Society. Her life and work has been featured on the cover page of Ocular Surgery News in the article, “Ophthalmic Innovator balances love of surgery, research and teaching” and in the prestigious Cataract and Refractive Surgery Today “5Q” interview.