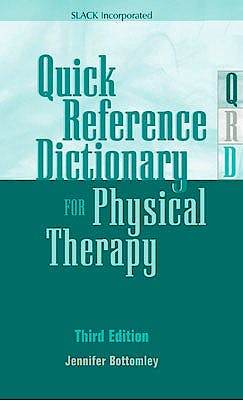 Quick Reference Dictionary for Physical Therapy has been revised and updated into a Third Edition to include the latest information in the field of physical therapy. This reference book, designed specifically for the physical therapy and physical therapist assistant student and practitioner, provides a magnitude of terms, definitions, guidelines, and references essential to the field.

This Third Edition provides quick access to over 3400 words and their definitions that are encountered on a day-to-day basis (400 more than the previous edition). There are also 41 appendices in this user-friendly, pocket-sized reference where you can find information such as lists of general acronyms and abbreviations for words commonly used in physical therapy/rehabilitation; commonly used acronyms for evaluative tests and measures; and definitions of impairment, disability, and handicap as established and accepted by the World Health Organization.

What is new inside the Third Edition:

Jennifer M. Bottomley, PhD2, MS, PT has a bachelor’s degree in physical therapy from the University of Wisconsin, Madison and an advanced master’s degree in physical therapy from the MGH Institute of Health Professionals in Boston, Massachusetts. She has a combined intercollegiate doctoral degree in gerontology (University of Massachusetts in Amherst) and health science and service administration (Union Institute, Cincinnati, Ohio) and a second PhD from the Union Institute in health service administration, legislation, and policy management with a specialty in gerontology.

Dr. Bottomley has practiced since 1974 in acute care, home care, outpatient clinics, nursing homes, and long-term care facilities. Currently, she is an academic and clinical educator in geriatric physical therapy internationally and throughout the United States. She works as an independent advisor and consultant setting up rehabilitation services in nursing homes and outpatient, home, and community settings in the Northeast and Pacific Northwest. She practices clinically in the Boston area in homeless shelters on a pro bono basis and travels as a volunteer to disasters, such as Katrina, the 2004 Asian Tsunami, and the Oklahoma City bombing. She is director of rehabilitation services for the Committee to End Elder Homelessness/HEARTH. She is a consultant in rehabilitation for Amedisys Home Health Care and Hospice, providing home and hospice care services.

Dr. Bottomley has served on advisory boards for the Office of the Surgeon General and the Office on Women’s Health in the Department of Health and Human Services and the White House Health Care Reform Panel for Home & Long Term Care Issues in the Elderly. She has been involved in the NASA aging studies, first as an intern and then advisor, since 1996. She was appointed as a delegate to the 2005 White House Conference on Aging for the State of Massachusetts. In January 2007, she was appointed to the White House Interdisciplinary Medicare Reform Advisory Board.

Dr. Bottomley is the current President of International Physical Therapists working with Older People (IPTOP)—a section of WCPT—and is the recent Past-President of the Section on Geriatrics of the APTA (2000–2006). She has served two terms as Vice President, two terms as Treasurer, and one term on the Board of Directors for that section. She was the Editor of GeriNotes from 1998 to 2000. She has spearheaded national efforts through the AARP and Gray Panther’s on education and physical conditioning to prevent crime, abuse, and fraud against the elderly. She has also orchestrated free screening and intervention projects for the Homeless Elderly of Massachusetts and has obtained HCFA grants to provide free screening and care for low-income elders in 14 ­central Massachusetts cities and towns.

Dr. Bottomley is a nationally renowned speaker, author, and educator. She is an Adjunct Faculty Member at MGH Institute of Health Care Professions and Simmons College in Boston. She has done clinical research in the areas of nutrition and exercise, foot care in the elderly, wound care, diabetes and peripheral vascular disease interventions, balance and falls in the Alzheimer’s population, Qi Gong and T’ai Chi as alternative exercise forms, the effects of weightlessness and bed rest on aging, and social policy development for the elderly. She has authored numerous chapters and articles in the area of geriatrics, is the presenter on six videotapes with the University of Maryland Videopress on Functional Evaluation of the Alzheimer’s patient, Functional Assessment in Rheumatoid Arthritis, and a four-tape series on Exercise in the Elderly. She has co-authored a geriatric text with Carole B. Lewis entitled Geriatric Rehabilitation: A Clinical Approach, Third Edition. Dr. Bottomley is the author of the recently published text entitled Geriatric Rehabilitation: A Textbook for the Physical Therapist Assistant and she has edited the Quick Reference Dictionary for Physical Therapy, Second Edition. In 2006, MGH Institute of Health Professions recognized Jennifer with the 2nd Annual Most Distinguished Alumni Award, and the Massachusetts Physical Therapy Association awarded her the prestigious Mary MacDonald Distinguished Service Award in 2008. In 2011, she received the Lucy Blair Award from the American Physical Therapy Association.