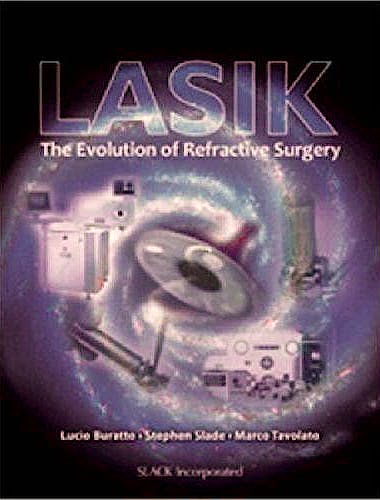 Lasik. the Evolution of Refractive Surgery

LASIK: The Evolution of Refractive Surgery takes you on a journey through the latest in laser and wavefront technology, as well as the most recent surgical procedures that include various complex cases, complications, and management.

Dr. Lucio Buratto is joined by Drs. Stephen Slade and Marco Tavolato, along with a team of 23 world-renowned surgeons, to produce a complete book specifically designed to improve the patient’s quality of vision with LASIK.

All surgeons will benefit from the format in which basic surgical procedures are explained, as well embracing the latest information available such as advanced laser procedures with ablations, femtosecond lasers, and excimers.

With more than 250 color illustrations demonstrating the various procedures and concepts, the book will help ophthalmologists develop a more thorough understanding of LASIK.

LASIK: The Evolution of Refractive Surgery is perfect for the surgeon interested in learning the concepts, developing the skills, and preparing for the surgical procedure. LASIK: The Evolution of Refractive Surgery contains a detailed description of the basic technique of LASIK and the special techniques devised by Dr. Lucio Buratto, Dr. Slade, Dr. Tavolato, and a group of highly acclaimed international surgeons experienced with encountering standard and unusual circumstances.

Lucio Buratto, MDis considered a leading international expert in cataract and myopia surgery. He is a pioneer in IOL implantation; in phacoemulsification; and in laser techniques for myopia, astigmatism, and hyperopia. Since 1980, Dr. Buratto has organized and presided over 47 updating congresses on cataract and glaucoma surgery and on laser therapy. He also organized 54 practical courses for the teaching of eye surgery and served as spokesman and teacher in 386 courses and congresses.

In 1989, Dr. Buratto presented and was the world’s first surgeon to use the excimer laser for intrastromal keratomileusis, and concurrently also started to treat low myopia using PRK techniques. In 1996, he was the world’s first surgeon to use the new technique called “Down-Up LASIK,” which improved the LASIK procedure for the correction of myopia. For teaching purposes, Dr. Buratto has performed surgical operations during live surgery sessions for more than 200 international and Italian congresses; performed surgery during satellite broadcasts to 54 countries in 4 different continents; and designed and produced 136 instruments for ocular surgery.

Dr. Buratto has written over 125 scientific publications and 53 monographs dedicated to ophthalmic surgery and has received several awards, including Maestro of Italian Ophthalmology with Medal of Merit (1998); Barraquer, during the International Congress of the American Academy (2000); Binkhorst Lecture during the XXII Annual Meeting, Paris (2004); and Fyodorov Medal at the HSIOIRS meeting, Athens (2006). Since 2007, Dr. Buratto has been Honorary President of AISO (Italian Academy of Ophthalmological Sciences) and past president of AICCER (Italian Association of Cataract and Refractive Surgery). Presently, he is the director of Centro Ambrosiano Oftalmico (Ophthalmic Microsurgery Center), and practices at his private profession in Milan.

Dr. Slade is a fellow of the American Academy of Ophthalmology and the American College of Surgeons. He is an active teacher of surgical techniques and has taught and certified over 8,000 surgeons in LASIK and lamellar refractive surgery. Several hundred have chosen him for their own surgery. Dr. Slade is also an active researcher and has served as medical monitor for several new technologies, including laser cataract surgery, wavefront LASIK, ICLs, femtosecond lasers, keratophakia and accommodating IOLs. He has the nation’s longest experience in LASIK (along with Stephen Brint, MD), femtosecond laser LASIK, accommodating IOLs, and femtosecond laser cataract surgery.

Dr. Slade has produced many articles and book chapters, holds 5 patents or patents pending in the field, and has authored or co-authored 8 textbooks on ophthalmic surgery. Dr. Slade has appeared on ABC, CBS, CNN, NYT, WSJ and was the featured surgeon on the Emmy award-winning PBS documentary “20/10 by 2010?” narrated by Walter Chronkite.

Marco Tavolato, MD graduated in medicine and surgery from the University of Padua in Italy. He specialized in ophthalmology at the same university. He was employed at the Centro Oculistico San Paolo Ophthalmology Department in the Hospital of Sant’Antonio di Padova as the Department’s Chief Consultant in October 2006. He has published scientific articles in national and international journals. He worked for a year at the VISSUM Institute in Alicante, Spain under the supervision of Professor Jorge Aliò.