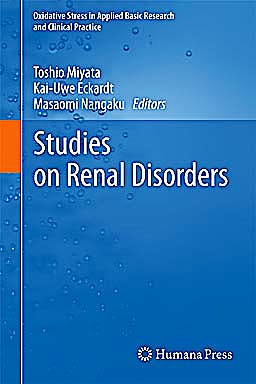 Conditions such as oxidative stress and hypoxia, which have a generalized impact on the oxygen metabolism, have been implicated in the genesis of kidney disease. This means that deepening our understanding of the pathobiology of oxygen metabolism in such diseases could be a fruitful path towards tangible clinical benefits. Studies in Renal Disorder collects reviews from leading researchers and clinical scientists working in exactly this field, providing an overview of the latest advances. The causal role of impaired oxygen metabolism in kidney disease has numerous clinical implications. It affects our understanding of the therapeutic benefits accruing from anti-hypertensive agents; the way we control hyperglycemia/hyperinsulinemia and hyperlipidemia; and our use of dietary approaches to the correction of obesity. The defensive mechanisms against oxidative stress, such as the Nrf2-Keap1 system, and hypoxia, such as the PHD-HIF system, have recently been explored in various cells, including kidney cells. These mechanisms include intracellular sensors for oxidative stress and hypoxia. This means that novel approaches targeting these sensors may offer clinical benefits in kidney disease in which oxidative stress and/or hypoxia is a final, common pathway.