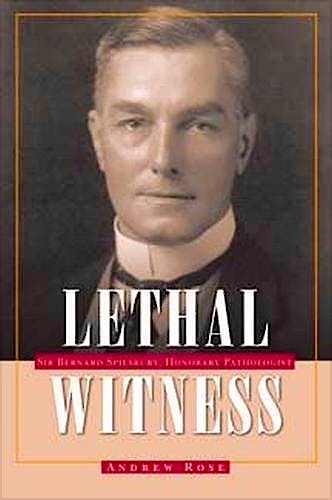 The man who brought forensic pathology out of the laboratory

Considered the father of modern forensic pathology, Spilsbury became well known after he provided crucial prosecutorial evidence in the Brides in the Bath case (where a nurse nearly drowned in a laboratory experiment designed to prove his theories), the Blazing Car and Brighton Trunk murders, and the Hay-on-Wye arsenic poisoning trial. Knighted in 1923, Spilsbury performed 20,000 postmortem examinations and became the first and only “Honorary Pathologist to the Home Office.”

Controversial and dramatic, Lethal Witness charts Spilsbury’s rise and fall as a media star, revealing how he put spin on the facts, embellished evidence, and played games with the truth. In some notorious cases, his “positive evidence” led to the conviction and execution of men innocent of murder—gross miscarriages of justice that now demand official pardons.

Andrew Rose examines Spilsbury’s carefully nurtured image, dogmatic manner, and unbending belief in his own infallibility and exposes the fallacies of the man dubbed “the most brilliant scientific detective of all time.” True crime fans, students of forensics, and law enforcement professionals will enjoy this biography of Sir Bernard Spilsbury, the man who helped raise forensic science to an art.

Andrew Rose became a member of the English Bar in 1968, specializing in crime, and is a former immigration judge in the United Kingdom. He is the author of Scandal at the Savoy and Stinie: Murder on the Common, which was a finalist for the Gold Dagger Non-Fiction Award of the Crime Writers’ Association