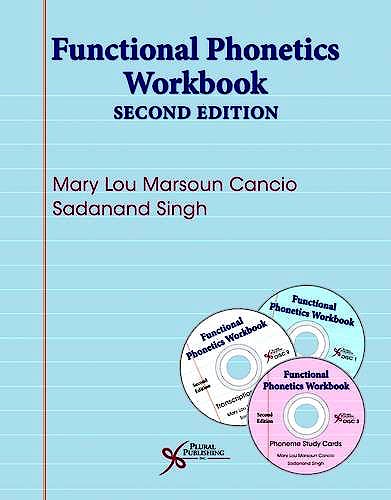 Students majoring in communicative disorders typically are required to complete one semester of undergraduate training in phonetics. To help students be successful in learning phonetics, it is essential to present the IPA in a simplified, useful manner. The user-friendly Functional Phonetics Workbook now in its second edition, meets this need. The basics of learning the IPA are emphasized so that students can be successful and confident at IPA transcription.

For the second edition, the author has added learning objectives to every chapter, each of which are followed by study questions to reinforce learning, a glossary of terms, additional transcription exercises for Central Vowels, and a third CD containing convenient Phoneme Study Card audio tracks for ease of access to study cards when reviewing sound/symbol association for IPA phonemes.

By providing these additions and enhancements, the authors have made Functional Phonetics Workbook, Second Edition even more useful as a text for academic programs, while retaining its user-friendly features that have made the text popular with those who want to refresh their knowledge of phonetics or learn basics of the IPA.

Melissa B. Fitcher, MA (George Washington University), Doody's Review Service, (2008):
"Most helpful are the numerous opportunities readers have to practice transcribing using the IPA, and the two audio CDs that provide sample exercises for transcribing online speech.... A valuable addition to the resources available for both teaching and learning the IPA. **** 4 Stars! [Refers to First Edition.]"

Mary Lou Marsoun Cancio received her MA degree in Speech-Language Pathology from California State University, Fresno in 1987. Since then time she has been employed in a public school setting and as a part-time lecturer. She has taught the introductory phonetics course at CSU-Fresno since 1994. She has also taught introduction to communicative disorders, introduction to language development and diagnostic procedures courses, and provided supervision for clinicians. Ms. Cancio served as advisor to the CSU-Fresno Chapter of NSSLHA from 1998-2003. She has served as secretary to the Communicative Disorders and Deaf Studies Chapter of the CSU-Fresno Alumni Association since 1995. In this capacity, she arranged conferences for nationally recognized speakers in Communicative Disorders to provide continuing education to area professionals. In 2003 she was the recipient of the CASHA District 5 Outstanding Achievement Award and in 2005 received the Friends of CDDS Appreciation award for more than 10 years of service to the Department of Communicative Disorders at CSU-Fresno.

Dr. Sadanand Singh (1934-2010) was a Fellow of the American Speech-Hearing-Language Association (ASHA) and an active member and contributor to the direction of the organization. He was also founder and Chairman of Plural Publishing, Inc. He was a Professor at The Ohio State University, Professor and Department Chair at Howard University, Professor and Director at the University of Texas Health Science program, and Professor and Chairman of the Communicative Disorders Department at San Diego State University. He also served on advisory boards with leading scientists, clinicians, and professors in several areas of key academic and clinical concentration. Dr. Singh authored several undergraduate and graduate texts in phonetics, phonology, measurements, and clinical procedures.