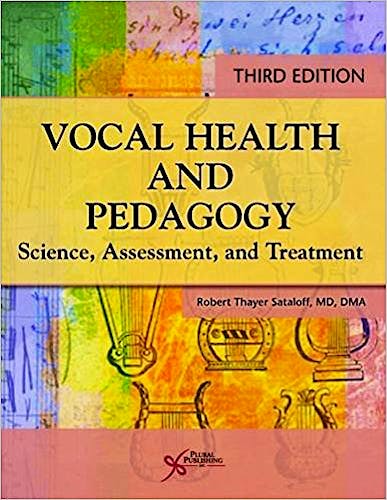 Now in one convenient volume, Vocal Health and Pedagogy: Science, Assessment, and Treatment, Third Edition answers every question you've ever had about the voice, from the physics of sounds, to vocal technique, to medications, to performance anxiety. Itpresents anatomical, physiological, and neurological considerations, as well as covers critical issues related to patient history, laryngeal function, the physical examination, and historical perspectives of vocal pedagogy.

The first part of the book introduces basic concepts of voice science, assessment, and training. It focuses on the science behind the common problems that afflict voice users and enables understanding of the medical approach to problem analysis. The secondpart of the book contains additional information on the specific health and performance conditions that affect the voice and their assessment and treatment. It considers the medical and non-medical issues affecting the human voice, including diagnosis and treatment of voice problems, the effects of physical injury, posture, pollutants and irritants, psychological effects, voice therapy, medication, and more.

Vocal Health and Pedagogy: Science, Assessment, and Treatment, Third Edition is ideal for courses in vocal pedagogy and speech-language pathology. Additionally, it is a valuable resource for professional and amateur performers and their teachers.

Chapter 2. The Singing Teacher in the Age of Voice Science
Richard Miller

Chapter 19. Use of Instrumentation in the Singing Studio
Robert Thayer Sataloff

Chapter 29. The Effects of Hormonal Contraception on the Voice
Jennifer P. Rodney and Robert Thayer Sataloff

Chapter 35. Pollution and Its Effects on the Voice
Robert Thayer Sataloff

Chapter 36. Pyrotechnics in the Entertainment Industry: An Overview
Cynthia Del’Aria and David A. Opperman

Chapter 41. Nutrition and the Professional Voice
Jennifer A. Nasser and Nyree Dardarian

Chapter 44. Bodily Injuries and Their Effects on the Voice
Robert Thayer Sataloff