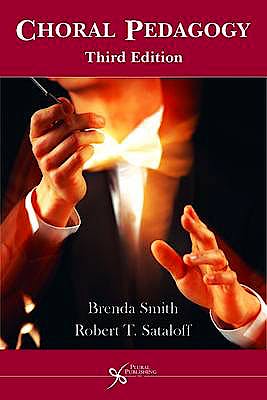 Choral Pedagogy, Third Edition, is the ideal text for voice teachers, choral conductors, church musicians, and professional and amateur singers who wish to develop strategies for lifelong singing. It concisely and clearly presents the principles of voice pedagogy from the perspective of both conducting and voice science in a user-friendly fashion, including helpful charts and simple anatomic diagrams. In addition, it offers teaching methods from history and philosophy, medical and voice science, and pedagogical concepts from active musical experts. Special attention is given to the needs of amateur singers and conductors. Topics covered include choral diction, posture and seating, rehearsal practices, and matters of vocal health.

For the third edition, the authors have completely revised the text, updating the medical information and expanding the exercises. They have also added three new chapters:

With its updates and additions, Choral Pedagogy, Third Edition, is a valuable resource for students of choral conducting, music education, church music, and choral singing.

Preface
About the Authors
Contributors

I. Introduction
1 Amateur and Professional Choral Singers
2 The Rehearsal Process

II. Vocal Health and Pedagogy
3 Anatomy and Physiology of the Voice
4 Medical Care of Voice Disorders

Robert T. Sataloff and Mary Hawkshaw
5 Hearing Loss in Singers and Other Musicians

Robert Sataloff, MD
Robert T. Sataloff, MD, DMA, FACS, is a Professor and Chairman, Department of Otolaryngology- Head and Neck Surgery and Senior Dean for Clinical Academic Specialties, Drexel University College of Medicine. He is also Adjunct Professor in the departments of Otolaryngology - Head and Neck Surgery at Thomas Jefferson University, the University of Pennsylvania and Temple University, and on the faculty of the Academy of Vocal Arts.

Brenda Smith, DMA
Dr. Brenda Smith teaches studio voice, diction and vocal pedagogy at the University of Florida in Gainesville. She has been widely recognized for her contributions to the concept of lifelong singing through proper voice care. Dr. Smith is a lyric soprano with special interests in the recital and concert repertoire. In addition, Dr. Smith was translator, collaborator, and assistant to Dr. Wilhelm Ehmann and Dr. Frauke Haasemann, the pedagogues whose work in Germany and the United States developed the concept known as “voice building for choirs”. Dr. Smith works regularly as consultant, clinician, and conductor with amateur and professional choirs. She has been associated with the choirs of St. Ignatius Loyola, the Central City Chorus, and the Dessoff Choirs in New York City, the Mendelssohn Club of Philadelphia, the Cathedral Choral Society of the National Cathedral in Washington, D.C., as well as the choirs of the Epiphany Cathedral in Venice, Florida. As an active member of the National Association of Teachers of Singing and the American Choral Directors Association, Dr. Smith speaks as a resource for solo singers, voice teachers, and choral conductors.