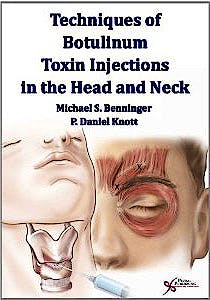 Techniques of Botulinum Toxin Injections in the Head and Neck

Techniques of Botulinum Toxin Injections in the Head and Neck is a simple, direct reference that illustrates specific techniques of performing Botulinum toxins (Botox) in the head and neck. All techniques are well-illustrated to allow for use as a quick technical reference.

This book not only provides well-illustrated technical vignettes, but also addresses the many possible potential uses of Botox in the head and neck, from neurologic and functional disorders, to headaches, to cosmetic applications.

Michael Benninger, M.D.
Michael S. Benninger, M.D. is the Chair of the Department of Otolaryngology-Head and Neck Surgery is the Cummings-Brush Chair in Surgical Education for the Henry Ford Health System in Detroit, Michigan, USA. He serves as Director of the hospital's Medical Center for the Performing Artist and as co-director of its Professional Voice Clinic.

In addition to his work at the hospital, Dr. Benninger has been very involved in Regional, National and International medical organizations. He serves on the Board of Directors of the American Academy of Otolaryngology-Head and Neck Surgery (AAO-HNS), and has been a former Vice President and Chairman of the Board of Governors of that Organization. He is a Past-President of the American Rhinologic Society and the Michigan Oto-Laryngological Society. He currently is the Editor-in-Chief of the Journal, Otolaryngology-Head and Neck Surgery, which is the largest peer-reviewed journal in the world for that specialty. He is on the Board of Directors of the Voice Foundation and the International Association of Phonosurgeons, and has recently been on the Executive Council of the Triological Society. He has served on the Residency Review Committee for Otolaryngology and as a member of the Medical Advisory Board for WebMD. He is the Past-Chairman of the Steering Committee for the Sinus and Allergy Health Partnership.

Dr. Benninger has authored or edited 4 books and has also has written numerous book chapters and scientific articles, focusing primarily on voice care and laryngology, nasal and sinus disease and health care management. He has lectured extensively across the country and throughout the world.

A graduate of Harvard University, Dr. Benninger received his medical degree from Case Western Reserve University in Cleveland, Ohio. He completed his residency at the Cleveland Clinic Foundation.