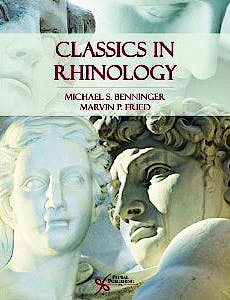 This book is a compilation of classic articles in the field of rhinology, paired with commentary from contemporary practicioners.

Michael Benninger, M.D.
Michael S. Benninger, M.D. is the Chair of the Department of Otolaryngology-Head and Neck Surgery is the Cummings-Brush Chair in Surgical Education for the Henry Ford Health System in Detroit, Michigan, USA. He serves as Director of the hospital's Medical Center for the Performing Artist and as co-director of its Professional Voice Clinic.

In addition to his work at the hospital, Dr. Benninger has been very involved in Regional, National and International medical organizations. He serves on the Board of Directors of the American Academy of Otolaryngology-Head and Neck Surgery (AAO-HNS), and has been a former Vice President and Chairman of the Board of Governors of that Organization. He is a Past-President of the American Rhinologic Society and the Michigan Oto-Laryngological Society. He currently is the Editor-in-Chief of the Journal, Otolaryngology-Head and Neck Surgery, which is the largest peer-reviewed journal in the world for that specialty. He is on the Board of Directors of the Voice Foundation and the International Association of Phonosurgeons, and has recently been on the Executive Council of the Triological Society. He has served on the Residency Review Committee for Otolaryngology and as a member of the Medical Advisory Board for WebMD. He is the Past-Chairman of the Steering Committee for the Sinus and Allergy Health Partnership.

Dr. Benninger has authored or edited 4 books and has also has written numerous book chapters and scientific articles, focusing primarily on voice care and laryngology, nasal and sinus disease and health care management. He has lectured extensively across the country and throughout the world.

A graduate of Harvard University, Dr. Benninger received his medical degree from Case Western Reserve University in Cleveland, Ohio. He completed his residency at the Cleveland Clinic Foundation.

His awards include first place award for Basic Research in Otolaryngology as a Resident from the American Academy of Ophthalmology and Otolaryngology (1975), the Edmund Prince Fowler Award for Basic Science Research from the American Laryngological, Rhinological, and Otological Society (Triologic Society) 1984, the Honor Award of the American Academy of Otolaryngology-Head and Neck Surgery 1988, and the Mark Award for Contributions to the Advancement of Laser Medicine and Surgery in 1994 from the American Society for Laser Medicine and Surgery. He received the Medal of the City of Paris in 1987 for the First International Medical Symposium offered by Harvard Medical School. He has been listed in the Best Doctors in America; Best Doctors in New York (Castle Connolly Medical LTD), as well as in "New York’s Top 100 Minimally Invasive Surgeons," and "New York’s Best Doctors" (New York Magazine).

Dr. Fried is on the Editorial Board of The Archives of Otolaryngology-Head and Neck Surgery, The Laryngoscope, Ear Nose and Throat Journal, The Journal of Clinical Laser Medicine and Surgery, Lasers in Surgery and Medicine, and The Annales d’Oto-Laryngologie et de Chirurgie Cervico Faciale. He is also a manuscript reviewer for a number of other journals.

His research interests have been and remain in the realm of technical applications for the improvement of surgery as it relates to disorders of the head and neck. This has included laser applications and safety, computer-assisted and image-guided surgery, and surgical simulation. He has been the principal investigator on grants issues by the Department of Defense, as well as current investigator from the Agency for Healthcare Research and Quality.

His research contributions have included investigations onto safe laser practices for disorders of the head and neck, investigations into microvascular reconstruction, including laser tissue welding, image guidance for photothermal treatment with lasers, and virtual endoscopy. He is currently investigating the use of sophisticated surgical simulation for training of residents and physicians for endoscopic sinus surgery and its relationship to the improvement of patient safety. He has authored over 150 original reports, reviews, and chapters, as well as books and monographs. He has been the Senior Editor of two editions of a definitive textbook on laryngeal disorders.