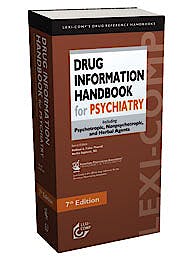 The monographs in this handbook contain multiple fields of information, including adult and pediatric dosing guidelines, FDA-approved and unlabeled uses, medication safety issues, and the following psychiatry-specific fields:

Medications are alphabetically organized by brand and generic name and cross-referenced by page number. Dictionary-like page headings help to expedite a drug search, making this a very user-friendly manual.

Updates to this Edition

Matthew A. Fuller, PharmD received his Bachelor of Science in Pharmacy from Ohio Northern University and then earned a Doctor of Pharmacy degree from the University of Cincinnati. A residency in hospital pharmacy was completed at Bethesda hospital in Zanesville, Ohio. After completion of his training, Dr Fuller accepted a position at the Veterans Affairs Medical Center in Cleveland, Ohio

Dr Fuller has over 20 years of experience in psychiatric psychopharmacology in a variety of clinical settings including acute care and ambulatory care. Dr Fuller is currently a Clinical Pharmacy Specialist in Psychiatry at the Louis Stokes Cleveland Department of Veterans Affairs Medical Center in Cleveland, Ohio. He is also an Associate Clinical Professor of Psychiatry and Clinical Instructor of Psychology at Case Western Reserve University in Cleveland, Ohio and Adjunct Associate Professor of Clinical Pharmacy at the University of Toledo in Toledo, Ohio. In this position, Dr Fuller is responsible for providing service, education, and research. He is also the Director of an ASHP accredited Psychiatric Pharmacy Practice Residency Program.

Dr Fuller is Board Certified by the Board of Pharmaceutical Specialties in both Pharmacotherapy and Psychiatric Pharmacy. He speaks regularly on the topic of psychotropic use and has published articles and abstracts on various issues in psychiatric psychopharmacology. His research interests include the psychopharmacologic treatment of schizophrenia and bipolar disorder.

Martha Sajatovic, MD is Professor of Psychiatry at Case Western Reserve University School of Medicine in Cleveland, Ohio. She is a clinician and researcher with particular interest in health outcomes for individuals with serious mental illness. She also has a strong interest in assessment instruments in psychiatry, and frequently serves as a consultant to pharmaceutical companies for rating scales training, as well as publishing in this area.

Dr Sajatovic received her BS in biology at Ohio State University and completed medical school at the Medical College of Ohio at Toledo. She completed her residency training in psychiatry at University Hospitals of Cleveland where she was Chief Resident in Research. Following completion of her residency, Dr Sajatovic was a Clinical Director of Inpatient Schizophrenia Research at University Hospitals of Cleveland, and later, was the Associate Chief of Psychiatry and Chief of the Mood Disorders Program at the Cleveland Veterans Affairs Medical Center in Cleveland, Ohio. Dr Sajatovic has extensive experience with the management of serious mental illness through her work as a state hospital Chief Clinical Officer (Cleveland Campus Northcoast Behavioral Healthcare), in her own private practice, as an inpatient attending physician in geropsychiatry, and in consulting with agencies providing community services to the seriously mentally ill. In 2003, Dr Sajatovic received an Exemplary Psychiatric Award from the National Alliance for the Mentally Ill (NAMI).

Dr Sajatovic has published a number of original papers on treatment of serious mental illness and treatment outcomes including work with special populations such as the elderly, women with psychosis, and individuals with developmental disorder. She has been a guest lecturer at numerous academic and community settings including speaking to consumer and family advocacy groups for individuals with psychiatric illness. Dr Sajatovic has a long-standing commitment to education including supervision of medical students and residents in psychiatry, lecturing at Case Western Reserve University School of Medicine, psychiatric resident supervision, and seminar teaching for residents in psychiatry.