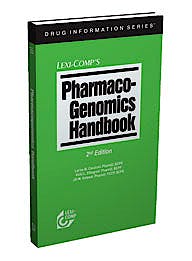 This exciting title by Lexicomp introduces pharmacogenomics to the forward-thinking healthcare professional and student.

The Pharmacogenomics Handbook presents information concerning key genetic variations that may influence drug disposition and/or sensitivity. Brief introductions to fundamental concepts in genetics and genomics are provided in order to bring the reader up-to-date on these rapidly-emerging sciences. This book provides a foundation for all clinicians who will be called on to integrate rapidly-expanding genomic knowledge into the management of drug therapy.

A great introduction to pharmacogenetic principles as well as a concise reference on key polymorphisms known to influence drug response.

Larisa H. Cavallari , PharmD, BCPS received her Bachelor of Science in Pharmacy and Doctor of Pharmacy degrees from the University of Georgia, College of Pharmacy. She then completed a one-year pharmacy practice residency with an emphasis in cardiology at the VA Medical Center in Memphis. Dr. Cavallari subsequently completed a two-year fellowship in cardiovascular pharmacogenomics at the University of Florida, where she was awarded the 1999-2000 American Foundation for Pharmaceutical Education Clinical Pharmacy Post-PharmD Fellowship in the Biomedical Research Sciences. Dr. Cavallari is presently an Assistant Professor of Pharmacy Practice at the University of Illinois at Chicago and a clinical pharmacist at the University of Illinois Medical Center. Dr. Cavallari is a Board-Certified Pharmacotherapy Specialist (BCPS) and taught the cardiology and critical care sections of the American College of Clinical Pharmacy-Sponsored Pharmacotherapy Preparatory Course from 2001-2003.

In her current position, Dr. Cavallari teaches in the cardiovascular section and is actively involved in clinical and basic science research focusing on ethnic and genetic contributions to cardiovascular drug therapy response. She also participates in the student experiential program , serves on several departmental and college committees, serves as a Senator for the College of Pharmacy, and remains actively involved in the care of patients on the cardiology service. Dr. Cavallari has authored several original research and review articles and has given a number of presentations on the subject of pharmacogenomics at both the state and national levels. She also authored the Pharmacogenetics chapter in the 5th edition of the textbook Pharmacotherapy: A Pathophysiologic Approach, DiPiro JT, et al, eds. Dr. Cavallari is currently a reviewer for the Annals of Pharmacotherapy and the 5th edition of the Pharmacotherapy Self-Assessment Program (PSA).

Dr. Cavallari is an active member of the American College of Clinical Pharmacy (ACCP), where she serves on the program committee, the Heart Failure Society of America (HFSA), and American Association of Colleges of Pharmacy (AACP).

Vicki L. Ellingrod, PharmD, BCPP received her bachelor's degree and Doctor of Pharmacy degree from the University of Minnesota. She completed a two-year fellowship in psychopharmacology and pharmacogenetics at the Universityof Iowa. After completion of her fellowship, Dr. Ellingrod became an Assistant Professor at the University of Iowa and is currently the Director of the Pharmacogenetics Laboratory at the University of Iowa College of Pharmacy. Her research interests include the genetics behind the metabolism of psychiatric medications, as well as the pharmacogenetics of the adverse drug reactions seen with antipsychotics. Currently, her research is primarily funded by the National Institutes of Mental Health through a career development award entitled "The Genetics of Antipsychotic Metabolism." In addition to her research in schizophrenia, Dr. Ellingrod is also actively involved in studies involving antipsychotic use in dementia, as well as serving as a co-investigator on several other projects involving pharmacogenetics and drug metabolism. Dr. Ellingrod has authored numerous journal articles and lectures locally, as well as nationally, on pharmacogenomics in psychiatry.

Dr. Kolesar practices in the Hematology and Oncology Clinics at the William S. Middleton VA Hospital in Madison, Wisconsin, managing the pharmacotherapy of ambulatory patients. Her research in pharmacogenomics includes the use of molecular markers to predict response and monitor efficacy of cancer chemotherapy, population genotyping for cancer susceptibility, and the regulation of gene expression of the two electron reductases. She has authored more than 100 abstracts, research articles, and book chapters, and as a principal investigator, she has received more than $350,000 in research funding from the NCI, ACS, and other sources. In addition, she holds two U.S. patents for novel assay methodologies for gene expression and mutation analysis. She has received several research awards from local, national, and international pharmacy organizations and a Merit Award from the American Society of Clinical Oncology (ASCO). Most recently, she received the "Innovations in Teaching Award" from the American Association of Colleges of Pharmacy.