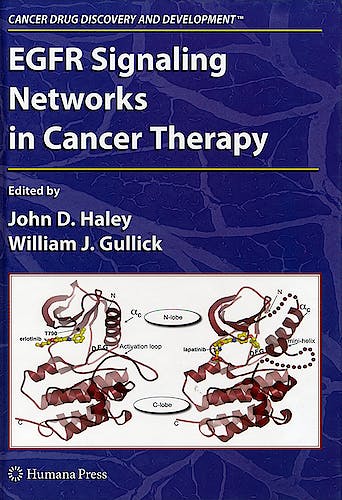 The epidermal growth factor (EGF) receptor and its downstream signal transduction networks have been implicated in the ontology and maintenance of tumor tissues, which has motivated the discovery and development of molecularly targeted anti-EGFR therapies. Edited by John Haley and William J. Gullick, EGFR Signaling Networks in Cancer Therapy, is separated into two sections. The first of which probes the molecular pathways and the intersection of signaling networks which are frequently deregulated in human cancers, with a view to describing EGF receptor in a tumor tissue specific context. Meanwhile, the second section illustrates the many ways in which EGF receptor contribute to abnormal survival and migration signaling in cancer cells and to epithelial to mesenchymal transition and metastasis. The book also describes the mitogenic, survival, adhesive and migratory pathways within a framework of interacting subsystems that contribute to the activity and physiological regulation of the receptor in normal and neoplastic tissues. Even though there is still much to learn, this volume explores this fascinating system with compelling information.

"This book describes the state of EGFR antagonist development and treatment modalities…. This will be of interest to those in academic research studying EGFR signaling and/or cancer. … This is an excellent reference for those focused on a particular aspect of EGFR signaling who are looking for a concise review. This is a timely review of an increasingly complex area of study."
(James P Luyendyk, Doody’s Review Service, January, 2009)

"This book bridges the basic and clinical progress in EGFR network in cancer therapy over 40 years of EGFR research. Due to the contributors’ basic science and clinical backgrounds, the book is … best suited for basic scientists, translational scientists, and oncologists who engage in EGFR associated research and clinical therapy at various levels. The book provides a comprehensive EGFR resource for researchers not only in basic biological fields but also in preclinical and clinical therapy … ."
(Guolin Zhang and Eric B. Haura, Cancer Control, Vol. 16 (4), October, 2009)