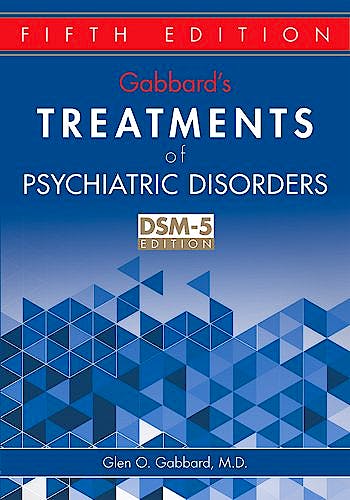 The definitive treatment textbook in psychiatry, this fifth edition of Gabbard's Treatments of Psychiatric Disorders has been thoroughly restructured to reflect the new DSM-5® categories, preserving its value as a state-of-the-art resource and increasing its utility in the field. The editors have produced a volume that is both comprehensive and concise, meeting the needs of clinicians who prefer a single, user-friendly volume. In the service of brevity, the book focuses on treatment over diagnostic considerations, and addresses both empirically-validated treatments and accumulated clinical wisdom where research is lacking.

Noteworthy features include the following: •Content is organized according to DSM-5® categories to make for rapid retrieval of relevant treatment information for the busy clinician.•Outcome studies and expert opinion are presented in an accessible way to help the clinician know what treatment to use for which disorder, and how to tailor the treatment to the patient.•Content is restricted to the major psychiatric conditions seen in clinical practice while leaving out less common conditions and those that have limited outcome research related to the disorder, resulting in a more streamlined and affordable text.•Chapters are meticulously referenced and include dozens of tables, figures, and other illustrative features that enhance comprehension and recall.

An authoritative resource for psychiatrists, psychologists, and psychiatric nurses, and an outstanding reference for students in the mental health professions, Gabbard's Treatments of Psychiatric Disorders, Fifth Edition, will prove indispensable to clinicians seeking to provide excellent care while transitioning to a DSM-5® world.

"...a compendium of state-of-the-art treatments of all major psychiatric disorders...practicing physicians will find it a valuable daily reference, and residents will use it as both a textbook and a board certification review."