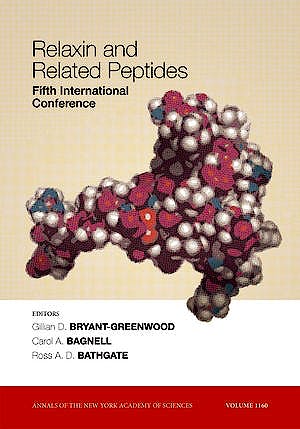 Relaxin is a protein hormone, produced and secreted during pregnancy in mammalian species, having superficial structural features resembling those of insulin. Since its initial isolation from the ovaries of pregnant pigs in 1976, increasing interest in relaxin has led to increased understanding of the chemistry, synthesis, secretion, biological roles, mechanisms of action, and potential clinical applications of relaxin in humans and domestic animals.
In pigs, rats, and mice, relaxin promotes growth and softening of the cervix, enabling rapid and safe delivery of the fetuses. In these species relaxin also promotes growth and development of the mammary apparatus.

Recently, biological effects of relaxin in the heart, kidney, liver, and brain have been identified, and these discoveries have triggered additional interest in possible clinical applications for relaxin. In 2002, a second form of relaxin, which is found primarily in the brain, was discovered.

Relaxin-like factor (also called insulin 3), which was discovered in 1993, is produced in the fetal testis and plays a major role in testicular descent during development. The recent identification of the receptors for both relaxin and relaxin-like factor has enabled more rigorous studies of the target tissues and mechanisms of action of these hormones.

This volume contains a description of recent advances and future research and clinical possibilities in the field of relaxin and related peptides.

3. Prominent Role of Relaxin in Improving Post-Infarction Heart Remodelling. Clues From In Vivo and In Vitro Studies With Genetically Engineered Relaxin-Producing Myoblasts.

7. INSL3 plays a role in the balance between bone formation and resorption.

8. Identification of the Relaxin-Responsive Cells in the Human Choriodecidua at Term.

9. New roles for INSL3 in adults: regulation of bone metabolism and association of RXFP2 gene mutations with osteoporosis.

10. Role of relaxin in human osteoclastogenesis.

11. RXFP1 is expressed on sperm acrosome and relaxin stimulates the acrosomal reaction of human spermatozoa.

12. Probing the Functional Domains of Relaxin-3 and the Creation of a Selective Antagonist for RXFP3/GPCR135 over Relaxin Receptor RXFP1/LGR7.

18. Relaxin-3 and its role in neuroendocrine function.

19. Relaxin-Induced Changes in Renal Function and RXFP1 Receptor Expression in the Female Rat.

21. Relative Roles of the Epithelial and Stromal Tissue Compartment(s) in Mediating the Actions of Relaxin and Estrogen on Cell Proliferation and Apoptosis in the Mouse Lower Reproductive Tract.

24. EVALUATION of SYSTEMIC RELAXIN BLOOD PROFILES in HORSES as a MEANS of ASSESSING PLACENTAL FUNCTION in HIGH-RISK PREGNANCIES and RESPONSIVENESS to THERAPERUTIC STRATEGIES.

26. Relaxin as a protective substance in the preserving solution for liver transplantation: Spectrophotometric in vivo imaging of local oxygen supply in an isolated perfused rat liver model.

28. An in vitro study of the protective effect of relaxin on brain tissue under ischemic stress.

31. Identification of Boar Testis as a Source and Target Tissue of Relaxin.

33. Conceptus Numbers do not Effect Blood Concentrations of Relaxin in the Rabbit.

34. Metabolic and Neuroendocrine Responses to RXFP3 Modulation in the CNS.

35. RXFP1 couples to the Gi3-G-PI3K-PKC pathway via the final 10 amino acids of the receptor C-terminal tail.

38. Development and Optimization of miRNA against relaxin-3.

39. Regulation of Rxfp2 (Lgr8) Expression in the Mouse Fetal Kidney by the Transcription Factor Pod1.

40. Addition of a carboxy-terminal green fluorescent protein (GFP) does not alter the binding and signaling properties of the relaxin family peptide receptor (RXFP) 3.

45. Investigations into the inhibitory effects of relaxin on renal myofibroblast differentiation.

47. Role of relaxin in the regulation of fibrosis in the lung: implications for airway remodeling in asthma.