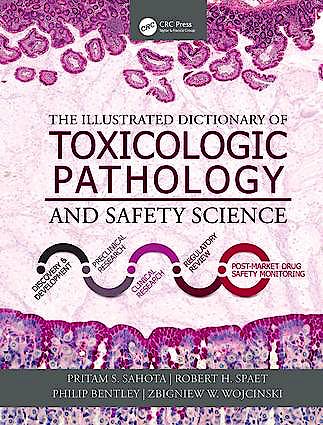 The Illustrated Dictionary of Toxicologic Pathology and Safety Science

The illustrated dictionary would provide descriptions of commonly used terms in toxicologic pathology accompanied by select pictures and illustrations to augment the written material where appropriate. It would also contain concise but less detailed information, describing the terms used in related areas such as anatomy, metabolism, drug development, and the allied fields of general toxicology. Illustrations would be provided to add visual context to the terms and descriptions. The definitions and descriptions would be prepared and peer reviewed by editors and contributors who are known experts in toxicologic pathology, toxicology, and drug development.

Dr. Pritam S Sahota studied for his Veterinary Medicine (BVSc) and Veterinary Pathology (MSc and PhD) degrees at Punjab Agricultural University in India. He is a Diplomate of the American Board of Toxicology. After completing his PhD, he immigrated to the USA in 1976 and worked for Dawson Research Corporation in Orlando, Florida for 10 years with increasing responsibilities as Toxicologic Pathologist, Senior Toxicologic Pathologist, and Scientific Director. As Scientific Director, he was overall responsible for the Departments of Pathology and Toxicology in this contract research organization (CRO) that was involved in the safety evaluation of drugs and chemicals. While working briefly for Dynamac Corporation in Research Triangle Park, NC (1986-87), Dr. Sahota conducted retrospective scientific audits on 23 NTP carcinogenicity studies and participated in discussions with the representatives of NTP, FDA and EPA to summarize the results of scientific audits of approximately 200 carcinogenicity studies. In 1987, Dr. Sahota joined Ciba-Geigy Pharmaceuticals in Summit, NJ as Head/Manager of Pathologists and helped establish Pathology Peer Review and Quality Control systems. He continued to work primarily in this position with increasing responsibilities in Ciba-Geigy and then Novartis (resulting from Ciba/Sandoz merger in 1997) up to 2000, when he became Head of Pathology (Director? Executive Director: 2000-12, East Hanover, NJ). In addition to his pathology responsibilities, Dr. Sahota also served as an International Project Team Representative for a number of marketed drugs including an antihypertensive blockbuster, Diovan, where he successfully defended company position with the FDA and various International Regulatory Authorities. During 2010-12, he also successfully led following Global Preclinical Safety initiatives at Novartis: Patient Centricity (Patient in the Lab), Cardiotoxicity, Ocular Toxicity, and evaluation of rodent carcinogenicity potential based on short-term toxicity and genotoxicity studies to minimize delays in regulatory submissions. Dr. Sahota also held an adjunct academic appointment of Assistant Professor in the University of Medicine and Dentistry of New Jersey, Newark, NJ for approximately 8 years. In 2013, he also published the book entitled "Toxicologic Pathology – Nonclinical Safety Assessment" (CRC Press) as Lead Editor. Since 2013, Dr. Sahota has been President of Global ToxPath LLC located in Kennewick, WA (Toxicologic Pathology Consultancy). 2

Robert Spaet obtained his BS and MS degrees in Zoology from Eastern Illinois University (1971, 1973). He began his career as a Sr. Research Technician at the Franklin McClean Memorial Research Institute, University of Chicago, before joining GD Searle Laboratories in Skokie, IL as a Parapathologist (1973-76). He became a Research and Teaching Assistant at the University of Oklahoma Health Sciences Center in Oklahoma City, OK, and completed the coursework towards a PhD in Anatomic and Experimental Pathology (1975-77) before joining Ciba-Geigy Pharmaceuticals in June 1977 as a Scientist II in Pathology, Preclinical Safety. He also completed his oral and written exams for PhD degree in Anatomic Pathology at University of Medicine and Dentistry of New Jersey, Newark, NJ (UMDNJ), in 1984 while working for CIBA. His core training and expertise lies in toxicologic pathology within the framework of drug safety evaluation. He has also had full time experience as a Study Director and is certified as a Diplomate, American Board of Toxicology. He has written many scientific papers in the field of toxicology and toxicologic pathology and holds full membership in several prominent professional societies including the Society of Toxicologic Pathologists (US and Europe), Society of Toxicology, American College of Toxicology, and is a member of the Roundtable of Toxicology Consultants. Robert has 35+ years of experience in toxicologic pathology and regulatory toxicology. During his tenure with CIBA and Novartis (merger of CIBA and Sandoz), he held a series of positions of increasing responsibility to eventually become Director, Translational Sciences, Preclinical Safety, Department of Pathology. His professional experience was broadened as an Exchange Scientist with CIBA in Basel, Switzerland (1987-88). Among other professional activities, he participated in the team teaching of Pathology in the School of Allied Health Sciences at UMDNJ for a number of years. Since 1986 he served as an International Project Team Preclinical Safety representative for a number of compounds in development, including several successfully marketed (blockbuster) pharmaceuticals. Within this capacity he has authored extensive safety summaries in support of IND/NDA/CTX drug submissions and represented the company as a preclinical safety expert before regulatory agencies such as the FDA and EMEA. Post-retirement, Robert continues to remain active in toxicologic pathology and non-clinical safety having established a consultancy RSPathologics, LLC. He is also a member of several high-profile groups including the Society of Toxicologic Pathology’s Science and Regulatory Policy Committee, the STP Membership Committee, and the European Society of Toxicologic Pathology Committee on Future Technologies in Toxicologic Pathology.

Zbigniew Wojcinski, D.V.M, D.V.Sc., DACVP, DABT is Principal and Co-Founder of Drug Development Preclinical Services, LLC, and has 30 years’ experience in drug development. Dr. Wojcinski received his undergraduate degree (B.Sc.) in Zoology at the University of Toronto and his D.V.M. and D.V.Sc. (Pathology) from the Ontario Veterinary College, University of Guelph. He is a certified Diplomate of the American Board of Toxicology and a Diplomate of the American College of Veterinary Pathologists. He is also recognized as a Specialist in Veterinary Pathology by the Canadian Veterinary Medical Association. Dr. Wojcinski gained experience in drug development and toxicologic pathology with Parke-Davis\Warner-Lambert and Pfizer Global Research and Development over 22 years and then Fulcrum Pharma Developments, Inc. for 3½ years. In 2011, he co-founded Drug Development Preclinical Services, LLC. He has extensive experience as Study Pathologist and Review Pathologist for acute, repeated dose subchronic and chronic oral and intravenous studies, including 5 carcinogenicity studies. Throughout his career, he has managed successful cross-functional drug development teams in CNS, Metabolic Diseases and Dermatology therapeutic areas. As Therapeutic Area Leader for Dermatology at Pfizer, Dr. Wojcinski was responsible for development and implementation of the safety and risk management strategies in this new therapeutic area at Pfizer. He has also been directly involved in the preparation of pre-IND documents, Nonclinical Safety Assessments for IND/IMPD/NDA/MAA, Investigator’s Brochures and labeling (USPI, SmPC) negotiations in CNS, anti-infective, and/or dermatology therapeutic areas. Dr. Wojcinski has had numerous interactions with regulatory agencies in the US, Europe, Canada and Australia for compounds at various stages of development. Most notably, Dr. Wojcinski was the toxicology representative throughout the entire development of the CNS drug, Lyrica®, which is now marketed worldwide. He has also provided pathology consultation and histopathology peer review on several projects in various therapeutic areas, including respiratory infections, dermatitis, and ophthalmic disease. Dr. Wojcinski has authored/co-authored numerous scientific manuscripts and 4 book chapters.

Philip Bentley is Principal Consultant at Toxicodynamix International LLC. He studied biochemistry at the University of Hull, UK, graduating with a BSc in 1970 and a PhD in 1974. He had postdoctoral fellowships at the Universities of Basel. Switzerland and Mainz, Germany. His postdoctoral research centered upon formation and inactivation of reactive metabolites and the enzymes involved in the metabolism of foreign compounds. In 1979 he joined the Investigative Toxicology group (known as Cell Biology) in the Toxicology Department of Ciba-Geigy, Basel, Switzerland and remained with the company, later Novartis, until 2014. In these 35 years he held various management positions in Europe and the USA with responsibility for Investigative Toxicology; Drug Metabolism; Drug Metabolism and Toxicology; Preclinical Safety Europe; Drug Metabolism and Pharmacokinetics; Toxicology/Pathology USA; Preclinical Safety USA and Global Preclinical Safety. In these positions he contributed to the registration of more than 45 marketed drug products and the preparation of several hundred IND’s. He has vast experience in the areas of drug metabolism and disposition, toxicology/pathology, genetic toxicology, pharmacokinetics/toxicokinetics and all aspects of investigative toxicology. He is well grounded in biochemistry, cell biology, molecular biology and pharmacology with the ability to integrate data from the different preclinical disciplines to enable translation to determine the clinical relevance of the findings. He is very familiar with global drug registration requirements and working on global projects. He has authored more than 80 scientific publications, has lectured in toxicology at the University of Basel for more than 30 years, and is a past President of the European Society of Biochemical Pharmacology and the Swiss Society of Toxicology. He was a member of the PhRMA/IQ Preclinical Leadership (DruSafe) Committee for 16 years, a member of the advisory board of the PSTC Biomarker consortium and a member of the expert working group for revision of the ICH S2 guidance on genotoxicity testing and the PhRMA expert group on genotoxic impurities.