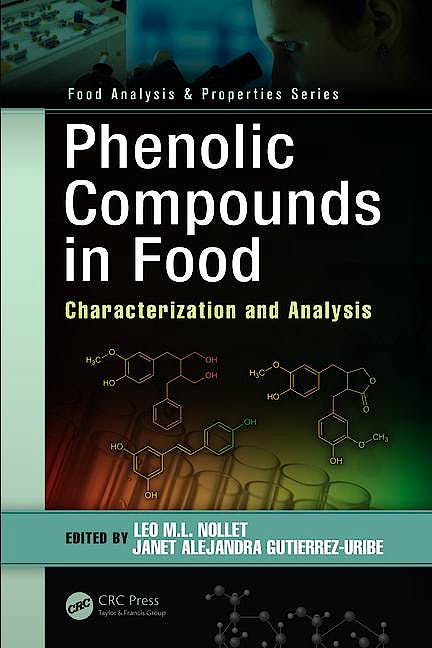 Phenolic compounds, one of the most widely distributed groups of secondary metabolites in plants, have received a lot of attention in the last few years since the consumption of vegetables and beverages with a high level of such compounds may reduce risks of the development of several diseases. This is partially due to their antioxidant power since other interactions with cell functions have been discovered. What’s more, phenolic compounds are involved in many functions in plants, such as sensorial properties, structure, pollination, resistance to pests and predators, germination, processes of seed, development, and reproduction.

Leo M. L. Nollet, PhD, earned an MS (1973) and PhD (1978) in  biology  from  the  Katholieke  Universiteit  Leuven,  Belgium.  He  is  an  editor  and  associate  editor  of  numerous  books.  He  edited  for  M.  Dekker,  New  York—now  CRC  Press  of  Taylor  &  Francis  Publishing  Group—the  first,  second,  and  third  editions  of  Food  Analysis  by  HPLC  and Handbook of  Food  Analysis.  The  last  edition  is  a  two-volume  book.  Dr. Nollet also edited the Handbook of Water Analysis (first, second,  and  third  editions)  and  Chromatographic  Analysis  of the Environment,third and fourth editions(CRC Press). With  F.  Toldrá,  he  coedited  two  books  published  in  2006,  2007, and 2017: Advanced Technologies for Meat Processing (CRC Press) and Advances in Food Diagnostics  (Blackwell  Publishing—now   Wiley).   With   M.   Poschl,   he   coedited   the  book  Radionuclide  Concentrations  in  Foods  and  the  Environment,also published in 2006 (CRC Press). Dr. Nollet has also coedited with Y. H. Hui and other colleagues on several books: Handbook of Food Product Manufacturing (Wiley,  2007),  Handbook  of  Food  Science,  Technology,  and  Engineering  (CRC  Press,  2005), Food  Biochemistry  and  Food  Processing  (first  and  second  editions;  Blackwell  Publishing—now Wiley—2006 and 2012), and the Handbook of Fruits and Vegetable Flavors (Wiley,  2010).  In  addition,  he  edited  the  Handbook  of  Meat,  Poultry,  and  Seafood Quality, first and second editions (Blackwell Publishing—now Wiley—2007 and 2012). From 2008 to 2011, he published with F. Toldrá five volumes on animal  product–related books: Handbook of Muscle Foods Analysis, Handbook of Processed Meats and Poultry Analysis, Handbook of Seafood and Seafood Products Analysis, Handbook of Dairy Foods Analysis, and Handbook of Analysis of Edible Animal By-Products. Also in  2011,  with  F.  Toldrá,  he  coedited  two  volumes  for  CRC  Press:  Safety  Analysis  of  Foods of Animal Origin and Sensory Analysis of Foods of Animal Origin. In 2012, they published  the  Handbook  of  Analysis  of  Active  Compounds  in  Functional  Foods.  In  a  coedition with Hamir Rathore, Handbook of Pesticides: Methods of Pesticides Residues Analysis was  marketed  in  2009;  Pesticides:  Evaluation  of  Environmental  Pollution  in 2012; Biopesticides Handbook in 2015; and Green Pesticides Handbook: Essential Oils for Pest Control in 2017. Other finished book projects include Food Allergens: Analysis, Instrumentation,  and  Methods  (with  A.  van  Hengel;  CRC  Press,  2011)  and  Analysis of Endocrine Compounds in Food (Wiley-Blackwell, 2011). Dr. Nollet’s recent projects include Proteomics in Foods with F. Toldrá (Springer, 2013) and Transformation Products of  Emerging  Contaminants  in  the  Environment:  Analysis,  Processes,  Occurrence,  Effects, and Risks with D. Lambropoulou (Wiley, 2014). In the series Food Analysis & Properties, he edited (with C. Ruiz-Capillas) Flow Injection Analysis of Food Additives (CRC Press, 2015) and Marine Microorganisms: Extraction and Analysis of Bioactive Compounds (CRC Press, 2016). With A.S. Franca, he edited Spectroscopic Methods in Food Analysis (CRC Press, 2017), and with Horacio Heinzen and Amadeo R. Fernandez-Alba  he  edited  Multiresidue  Methods  for  the  Analysis  of  Pesticide  Residues  in  Food(CRC Press, 2017).

Janet  Alejandra  Gutiérrez-Uribe,  PhD,  is  an  associate  pro-fessor  in  the  NutriOmics  research  group  at  the  School  of  Engineering and Science from Tecnológico de Monterrey. She is the director of the Bioengineering Department in the South Region of Tecnológico de Monterrey. Dr. Gutiérrez-Uribe is a food engineer with graduate studies in biotechnology. For more than 10 years, she has worked on phytochemistry and in the nutritional biochemistry of phenolic compounds and other  nutraceuticals.  Her  research  is  focused  on  Mexican  foods such as black beans, cacti, agave, and maize. She has published more than 60 papers in different prestigious jour-nals and is the inventor of more than 10 patents and applica-tions in Mexico and abroad. She has graduated more than 25 graduate students and her teaching skills go beyond lectures. Work with industry and social service are her main drivers in the development of challenges related to biochemistry, molecular biology, cell culture, and nutraceutical discovery.