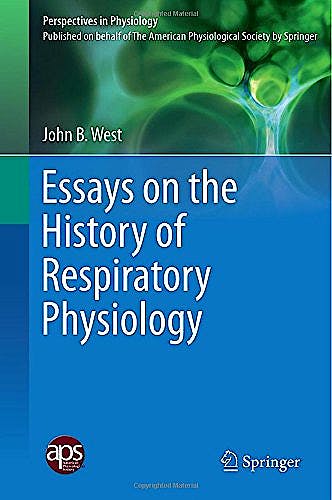 Essays on the History of Respiratory Physiology

This book consists of 23 essays about prominent people and events in the history of respiratory physiology.Itprovides afirst-hand chronicle of the advancements made in respiratory physiology starting with Galen and the beginnings of Western physiology. The volume covers every aspect of the evolution of this important area of knowledge: pulmonary circulation, Boyle’s Law, pulmonary capillaries and alveoli, morphology, gas exchange and blood flow, mechanics, control of ventilation, and comparative physiology. The book emphasizes societal and philosophical aspects of the history of science. Although it concentrates on physiology, it also describes how cultural movements, such as The Enlightenment, shaped the researchers discussed.

1. Galen and the beginnings of Western physiology
2. Ibn al-Nafis, the pulmonary circulation, and the Islamic Golden Age
3. Torricelli and the ocean of air: the first measurement of barometric pressure
4. Robert Boyle’s landmark book of 1660 with the first experiments on rarified air
5. The original presentation of Boyle's Law
6. Robert Hooke: Early respiratory physiologist, polymath, and mechanical genius
7. Marcello Malpighi and the discovery of the pulmonary capillaries and alveoli
8. Stephen Hales: neglected respiratory physiologist
9. Joseph Black, carbon dioxide, latent heat, and the beginnings of the discovery of the respiratory gases
10. Carl Wilhelm Scheele, the discoverer of oxygen, and a very productive chemist
11. Joseph Priestley, oxygen, and the Enlightenment
12. The collaboration of Antoine and Marie-Anne Lavoisier and the first measurements of human oxygen consumption
13. Henry Cavendish, hydrogen, water, and the weight of the earth
14. Humphry Davy, nitrous oxide, the Pneumatic Institution, and the Royal Institution
15. Denis Jourdanet (1815-1892) and the early recognition of the role of hypoxia at high altitude
16. Centenary of the Anglo-American High Altitude Expedition to Pikes Peak
17. Alexander M. Kellas and the physiological challenge of Mount Everest
18. Ravenhill and his contributions to mountain sickness
19. George I. Finch and his pioneering use of oxygen for climbing at extreme altitudes
20. Joseph Barcroft's studies of high altitude physiology
21. The physiological legacy of the Fenn, Rahn and Otis school
22. The physiological challenges of the 1952 Copenhagen poliomyelitis epidemic and a renaissance in clinical respiratory physiology
23. Historical aspects of the early Soviet/Russian manned space program.