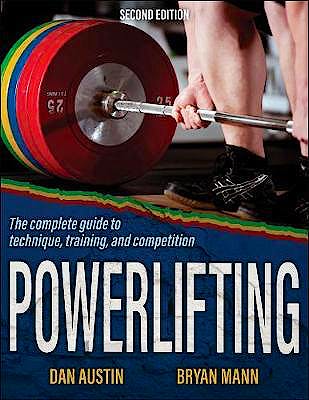 Powerlifting. The Complete Guide to Technique, Training, and Competition

The mental and physical demands of powerlifting are unlike any other sport. Athletes must be committed and focused on success. In Powerlifting, Second Edition, powerlifting hall of famer Dan Austin, winner of 10 world powerlifting championships and 18 national championships, teams with strength and conditioning expert Dr. Bryan Mann to offer the most comprehensive powerlifting resource available.

This no-nonsense approach to training and competing in the sport offers over 100 exercises that promote the development of the three primary movements—the squat, bench press, and deadlift—and their related supplemental exercises. Dynamic warm-up routines and recovery techniques get you primed for training, making it a one-stop guide to powerlifting success. The second edition has been updated to address female powerlifters and includes a 14-week competition program, six gender- and exercise-specific training programs, as well as three 8-week off-season training programs. Precompetition checklists give you at-a-glance guides for tasks to complete and items to bring to the meet.

Powerlifting also equips you to fuel for maximum production, providing examples of the best sources of protein and carbohydrates and information on preworkout drinks and common supplements. The psychological side of the sport is addressed with mental health advice and visualization tools and recommendations to use both during training and competition as well as during personal time.

Based on the latest in exercise research and science, Powerlifting is an indispensable resource for competitive lifters or recreational gym enthusiasts looking to take their lifting to another level, making Powerlifting the ticket to a new max.

Dan Austin, MSCC, is the assistant director of sport performance at the University of South Carolina. He has been at the university since 2002 and is currently working with the track and field and equestrian teams. Before joining University of South Carolina, he was the head strength coach at Oklahoma State University, Mississippi State University, University of Nevada–Las Vegas, Tennessee State University, and Austin Peay State University. While at Oklahoma State, he was voted the Big 12 Conference's Strength and Conditioning Coach of the Year. Austin earned his bachelor's degree in health and physical education from Newberry College and a master's degree from Austin Peay State University. He has been a strength and conditioning coach for more than 25 years. Austin is certified by USA Weightlifting, the International Sport Sciences Association, the National Association of Speed and Explosion, and the Collegiate Strength and Conditioning Coaches Association. He is also a level II specialist in sport conditioning. He is a master collegiate strength and conditioning coach (MSCC), which is the highest certification a strength coach can achieve. Austin has been powerlifting for over 35 years and was voted into the Powerlifting Hall of Fame in 2011. Throughout his career he has won 10 world powerlifting championships and 18 national championships while holding several world records in the deadlift and combined total weight. He was voted the greatest 148-pound powerlifter of all time and was the first lifter under 148 pounds to deadlift over 700 pounds.

Bryan Mann, PhD, CSCS, has been involved in the sport of powerlifting since 1996. Since then, he has set numerous records as a high school, teen, and junior athlete. Throughout high school and college, Mann was a four-time national and two-time world champion in powerlifting for the Natural Athlete Strength Association and was considered among the top 20 athletes in the world for his age. Mann is currently an assistant clinical professor of kinesiology and sport science at the University of Miami. In addition, he volunteers his time in the athletic department to provide advisement regarding many of the teams’ training methods and programming. He was previously a strength and conditioning coach at the University of Missouri, Missouri State University, University of Tulsa, and Arizona State University. During his time as a strength and conditioning coach, he worked with many athletes who went on to professional careers as well as Olympians. Mann received his degree in health promotion from Missouri State University in 2003, a graduate certificate in sport management in 2004, a master’s degree in health education and promotion in 2006, and a PhD in health education and promotion in 2011. Mann is recognized as a certified strength and conditioning specialist (CSCS) through the National Strength and Conditioning Association (NSCA).