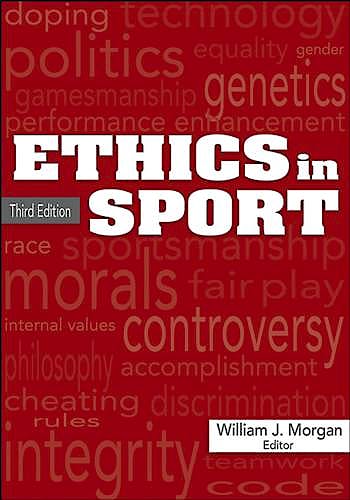 Index
About the Editor

Ethical and moral dilemmas in sport have not diminished since Ethics in Sport was last published. The need to understand and confront such issues is at a premium, and this latest edition of Ethics in Sport will ground readers in the issues and the stakes involved.

Ethics in Sport has long been known as a go-to source that tackles the moral and ethical issues in today’s sport culture. This third edition retains many of the previous editions’ thoughtful and timeless pieces, which speak directly to current issues, while adding 17 new essays to the mix. The inclusion of these new essays reflects the increasing sophistication of the philosophy of sport literature as well as the growth in the field.

Together, these essays from well-known authors give students classic and contemporary views of topics where sports and ethics collide.

This sweeping anthology of relevant and cutting-edge essays covers a variety of topics, including doping, the use of technology, gender controversies, and much more. The book is organized into five parts, with part I looking at the nature of sport, including its internal values and moral foundations. Part II investigates competition and fair play, including aspects of sportsmanship, winning, cheating, and gamesmanship. Part III examines doping and genetic enhancement in sport, including gene doping, “mechanical doping,” and drug-enhanced performance. In part IV the essays explore gender and sexual equality in sport, including sex segregation and the concept of gender equality. Part V delves into issues of race, spectatorship, and politics, investigating political philosophy as it applies to sports, the fascination with sports heroes, and the ethics of supporting teams.

Ethics in Sport, Third Edition, comes with an instructor guide that includes a sample syllabus, introduction, and answers to the discussion questions to facilitate class conversations. It also offers suggested class assignments for each of the five parts in the book to spur deeper discussion and understanding of the ethical issues presented in the book.

With its wealth of new essays, Ethics in Sport keeps you abreast of current ethical issues in sport. As such, this text is ideal for courses in sport ethics and ethics in sport and philosophy. It is also useful as a reference for scholars, researchers, ethicists, sociologists, and philosophers of sport.

William J. Morgan, PhD, is a professor in the division of occupational science at the University of Southern California in Los Angeles and holds a courtesy appointment in the university’s school of communication. He has served as editor and has published extensively in the Journal of the Philosophy of Sport. He currently serves on the journal’s editorial review board. He has presented numerous papers on the topic of ethics in sport throughout the world and has written and edited several books on the topic: Why Sports Morally Matter, Philosophic Inquiry in Sport, Leftist Theories of Sport: A Critique and Reconstruction, Sport and the Humanities: A Collection of Original Essays, and Sport and the Body: A Philosophical Symposium.

Dr. Morgan is former president of the International Association for the Philosophy of Sport. In 1995, he received the association's Distinguished Scholar Award. In the same year, he was elected an active fellow of the American Academy of Kinesiology and Physical Education.