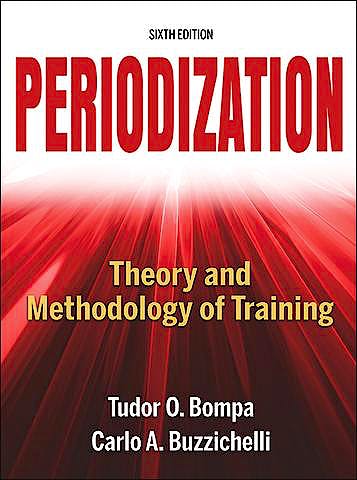 Periodization. Theory and Methodology of Training

Tudor O. Bompa, PhD, revolutionized Western training methods when he introduced his groundbreaking theory of periodization in his native Romania in 1963. After adopting his training system, the Eastern Bloc countries dominated international sports through the 1970s and 1980s. In 1988, Bompa began applying his principles of periodization to the sport of bodybuilding. He has personally trained 11 Olympic medalists (including four gold medalists) and has served as a consultant to coaches and athletes worldwide.

Learn how to maximize training gains with Tudor O. Bompa, the pioneer of periodization training, and Carlo A. Buzzichelli, one of the world’s foremost experts on training methods, in the sixth edition of Periodization: Theory and Methodology of Training. Guided by the authors’ expertise, the sixth edition offers information central to understanding the latest research and practices related to training theory while providing scientific support for the fundamental principles of periodization.

The sixth edition of this definitive text presents a comprehensive discussion of periodization based on the philosophy of Tudor Bompa. It features the following:

In addition to applying periodization models to resistance training, Periodization also discusses sport-specific endurance. You’ll be introduced to different methods of testing and developing endurance, including the physiological basis for each method.

Instructors will also find a newly added image bank, allowing access to tables and figures in the text for use when creating lecture materials.

Periodization: Theory and Methodology of Training presents the latest refinements to Bompa’s theories on periodization to help you create training programs that enhance sport skills and ensure peak performance.

Bompa’s books on training methods, including Theory and Methodology of Training: The Key to Athletic Performanceand Periodization of Training for Sports, have been translated into 19 languages and used in more than 180 countries for training athletes and educating and certifying coaches. Bompa has been invited to speak about training in more than 30 countries and has been awarded certificates of honor and appreciation from such prestigious organizations as the Ministry of Culture of Argentina, the Australian Sports Council, the Spanish Olympic Committee, NSCA (2014 Alvin Roy Award for Career Achievement), and the International Olympic Committee.

A member of the Canadian Olympic Association and the Romanian National Council of Sports, Bompa is a professor emeritus at York University, where he taught training theories since 1987. In 2017, Bompa was awarded the honorary title of doctor honoris causa in his home country of Romania. He and his wife, Tamara, live in Sharon, Ontario.

Buzzichelli’s coaching experience includes the 2002 Commonwealth Games, the 2003 and 2017 World Track and Field Championships, and the 2016 Summer Olympics. As a strength and conditioning coach for team sports, his senior teams have achieved a first place and a second place in their respective league cups, and his junior teams have won two regional cups. As a coach of individual sports, Buzzichelli’s athletes have won 23 medals at national championships in four different sports (track and field, swimming, Brazilian jiujitsu, and powerlifting), set nine national records in powerlifting and track and field, and won 10 medals at international competitions. In 2015, Buzzichelli coached two Italian champions in two different sports; in 2016, two of his athletes earned international titles in two different combat sports.