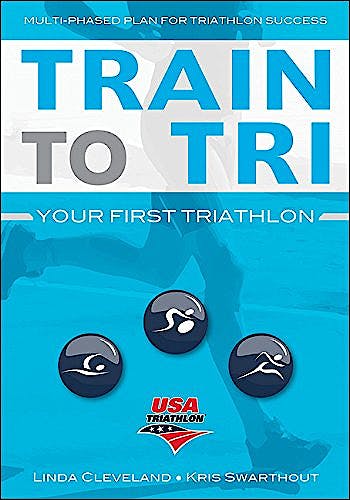 Train to Tri. Your First Triathlon

Swim. Bike. Run. If the combination of those three words gets you excited, then you need Train to Tri: Your First Triathlon. Written by experts with USA Triathlon (USAT), the largest multisport organization in the world, this book provides proven strategies, secrets, and advice to gear up for your first sprint-distance or standard-distance event.

This is not another one-size-fits-all program. Train to Tri is designed so you can focus on the training you need most. You’ll establish a baseline in each of the three phases: running, cycling, and swimming. You’ll find bronze, silver, or gold levels of training for each phase, which can be combined and customized to your needs, your goals, and your lifestyle.

If you’re ready to go from athlete to triathlete, let Train to Tri and the experts at USAT lead the way.

Glossary
Index
About USA Triathlon
About the Authors

USA Triathlon (USAT) is the national governing body of triathlons and other multisport disciplines in the United States. The organization is the sanctioning authority for more than 4,300 diverse events ranging from grassroots to national championship races across the country. The organization works to create interest and participation through a variety of programs, including camps, clinics, races, and educational opportunities. USA Triathlon’s nearly 500,000 members are coaches, race directors, officials, athletes of all ages, parents, and multisport enthusiasts, all of whom contribute to the success of the sport in the United States.

USA Triathlon is responsible for the identification, selection, and training of elite triathletes who represent the United States in international competitions, including International Triathlon Union (ITU) World Championships, Pan American Games, and the Olympic and Paralympic Games.

USA Triathlon also fosters grassroots expansion of the sport, which is facilitated by the sanctioning of age-group events and triathlon clubs around the country. In addition to local races in all 50 states, USA Triathlon hosts national and regional championships for triathletes ages 7 to 80 and older.

USA Triathlon strives to expand and inspire the triathlon community while providing the resources required for all involved to reach their potential.

Linda Cleveland, MS, CSCS, is a USA Triathlon Level II certified coach and the coach development senior manager at USA Triathlon. She is the editor and lead contributing author of the bestselling Complete Triathlon Guide (Human Kinetics, 2012). She has a bachelor’s degree in exercise fitness management with a minor in health promotion from the University of Wisconsin–Oshkosh, along with a master’s degree in exercise and wellness from Arizona State University. She has been an adjunct faculty member at Arizona State University, worked in corporate wellness at Motorola in Phoenix, and coached triathletes, cyclists, and runners since 2004.

Cleveland has been with USA Triathlon (USAT) since 2005. As the coach development senior manager, she is responsible for overseeing a variety of programs in the education department, including coaching certification clinics and curriculum, mentorship opportunities in elite coaching, performance coaching newsletters, USAT University, webinars, youth clinics, and the SafeSport program. Since joining USAT, she has made the coaching education program one of the most highly regarded in any national governing body. Cleveland offers high-performance coaches the opportunity to learn what it takes to work with world-class athletes, and she teaches new coaches how to work with beginner athletes. She has served as a head coach at several International Triathlon Union (ITU) races, including continental cups, world cups, and world championship series races.

Cleveland keeps active by training and by chasing her young son and daughter around the mountains of Colorado. She enjoys hiking, skiing, mountain biking, fishing, and enjoying time in the great outdoors.

Kris Swarthout has been a competitive presence in triathlons since 2001, first as an athlete and now as a coach. He is currently the Midwest regional chairperson for USA Triathlon, the owner of Final K Sporting Services, and the head coach of the Minnesota chapter of the Z3 Junior/Youth High Performance Team. He has been selected as age-group coach for Team USA by USA Triathlon four times and accompanied Team USA to the ITU world championships around the globe.

Swarthout has coached athletes ranging from professional to first-time amateurs. He strives to help people achieve the ultimate balance of family and sport in their lives. He coauthored the current USA Triathlon Level 1 coaches’ training manual and has been published and quoted in some of the world’s biggest newspapers and other media, including the New York Times, Boston Globe, Minneapolis Star Tribune, BBC, Runner’s World, and Triathlete.