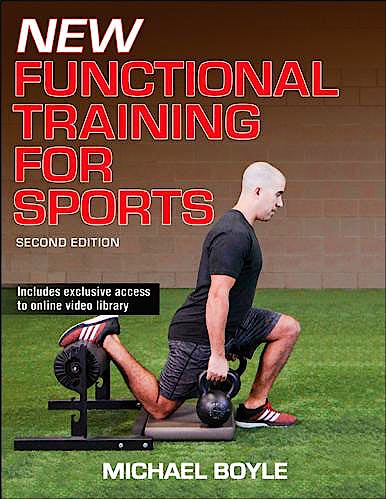 Train to perform at the highest level with the lowest risk of injury. New Functional Training for Sports, Second Edition produces the best results on the court, field, track, and mat, not just in the weight room.

Michael Boyle, one of the world’s leading sport performance coaches, presents the concepts, methods, exercises, and programs that maximize athletes’ movements in competition. A series of functional assessments help in determining the design of a specific plan for each athlete. Self-reinforcing progressions in exercises for the lower body, core, upper body, and ultimately total body give athletes the balance, proprioception, stability, strength, and power they require for excelling in their sports. Sample programs assist in the customization process and ensure each aspect of preparation for physical performance.

Boyle also draws on the latest research and his wealth of experience to offer programming advice and recommendations on foam rolling, stretching, and dynamic warm-ups.

New Functional Training for Sports is a refined and expanded version of Boyle’s original work published more than a decade previously. This edition offers the most current functional training expertise to apply to your specific purposes.

Because of his expertise in sport performance training, Boyle has coached elite athletes on teams such as the Boston Red Sox, Boston Bruins, New England Revolution, and Boston Breakers as well as the U.S. women’s Olympic teams in soccer and ice hockey. In 2012, Boyle joined the Boston Red Sox coaching staff as a strength and conditioning consultant for the team, which later won the World Series. His client list over the years reads like a Who’s Who of athletic success, including retired American football defensive end Marcellus Wiley, 2012 Olympic judo gold medalist Kayla Harrison, and Liverpool striker Daniel Sturridge.

Boyle was the head strength and conditioning coach at Boston University from 1984 to 1997. From 1990 to 2012 he was the strength and conditioning coach for men’s ice hockey at BU..Boyle provides performance-enhancement training for athletes of all levels through his Boston-based gym, Mike Boyle Strength and Conditioning, which has been named one of America’s 10 Best Gyms by Men’s Health magazine. Boyle’s range of experience includes training athletes from the middle school level to all-stars in most major professional sports.