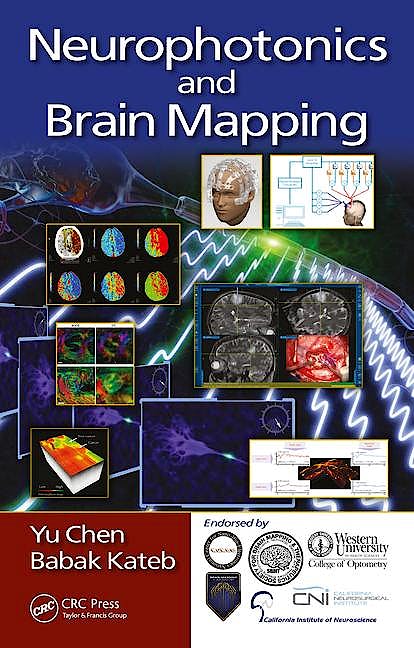 Understanding how the brain works and developing effective therapeutics are important in advancing neuroscience and improving clinical patient care. This book covers state-of-the-art research and development in optical technologies and applications for brain mappingand therapeutics. It provides a comprehensive overview of various methods developed using light, both microscopic and macroscopic techniques. Recent developments in minimally-invasive endoscopic imaging of deep brain structure and function, as well as light-basedtherapy are also reviewed.

Dr. Yu Chen is an associate professor at the University of Maryland in College Park, Maryland. He received his bachelor’s degre in physics from Peking University, Beijing, China, in 1997 and his PhD in bioengineering from the University of Pennsylvania, Philadelphia, Pennsylvania, in 2003. His research interests include the following: optical coherence tomography (OCT), laminar optical tomography (LOT), and multiphoton microscopy (MPM), development of novel quantitative optical sensing and imaging devices for clinical translation, and preclinical and clinical applications of optical technologies in imaging brain function, renal physiology, cancer therapy, and tissue engineering. He received the NSF CAREER Award in 2012. Dr. Chen has been an associate editor of Medical Physics and a guest editor of IEEE Journal of Selected Topics on Quantum Electronics and the SPIE journal Neurophotonics. He is a member of IEEE, SPIE, and the Optical Society of America (OSA) and has served as conference program chair and general chair for OSA Conference on Lasers and Electro-Optics (CLEO): Applications and Technologies.

Babak Kateb, MD, is a neuroscientist with more than 15 years of research experience. His research has been focused on the introduction of advance diagnostics and therapeutics into clinical neuroscience in order to rapidly identify and introduce game-changingtechnologies to treat neurological disorders such as brain cancer, Alzheimer’s disease, Parkinson’s disease, and brain and spinal disorders. He did his research fellowship at the University of South California (USC) department of neurosurgery and also studiedneuroengineering at USC Ming Hsieh Institute.

Dr. Babak established the Society for Brain Mapping & Therapeutics (SBMT) while doing his fellowship 13 years
ago at USC. He is the founding chairman of the board of directors and CEO of the Society for Brain Mapping & Therapeutics (SBMT), president and scientific director of the Brain Mapping Foundation, and director of the National Center for Nano-Bio-Electronics; the center is focused on the integration of nanotechnology, cellular therapeutics/stem cell, medical device, and imaging. He was director of research and development at the Department of Neurosurgery at City of Hope Cancer Center. He was a research scientist in the Department of Neurosurgery at Cedars-Sinai Medical Center for nearly a decade, where he developed a partnership between Cedars-Sinai and NASA and established clinical trials using NASA technologies. He is a recipient of NASA Tech Brief Award for his pioneering work onsniffing cancer cells using NASA’s electronic nose. He has pioneered the technique for using NASA multiwall carbon nanotubes to activate macrophages for brain cancer immunotherapy and has recently received an approval from the FDA to microwave soft tissue. Thetechnology could also be used for brain, liver, head and neck, prostate, and breast cancer.

In 2015, the SBMT and Brain Mapping Foundation Board of Directors presented him with the Pioneer in Medicine award. He has been recognized by Vice President Biden, the Mayor of Los Angeles, and the Governor of California for his dedication in science. He iscurrently collaborating with Los Alamos National Lab (LANL) and has dual appointment with NASA/JPL as a visiting scientist. His research at NASA and LANL involves the use of artificial intelligence and supercomputing for brain mapping and therapeutics, use of electronic nose for cancer detection, application of new UV imaging for intraoperative brain mapping, and use of LANL advance ultrasonic technology for brain stimulation; Dr. Babak holds many patents in these areas. He established a new publication with PLoSOne, which is called PLoSOne NeuroMapping & Therapeutics, for which he serves as editor-in-chief and was the force behind three successful NeuroImage-Brain Mapping and Therapeutics special issues. He is editor of the inaugural textbook titled The Textbook of Nanoneuroscience and Nanoneurosurgery, published by Taylor & Francis Group, 2013, and the editor of the inaugural textbook of Neurophotonic and Brain Mapping, which is due for a release in December 2015. On September 1, 2015, he took over new roles at the California Neurosurgical Institute (CNI) as scientific director and director of strategic alliance; CNI provides neurological and neurosurgical care for five major hospitals (four million residents) in Los Angeles. He has been deeply involved in global neuroscience legislationthrough his close collaboration with the U.S. Congressional Neuroscience Caucus as well as members of the Canadian Parliament. He has chaired three congressional briefing on brain mapping and given a talk at the Canadian Parliament. His initiatives have impactedhealth care delivery to wounded soldiers in the United States. He has been one of the key players in President Obama’s BRAIN initiative and a coauthor of the G20 World Brain Mapping and Therapeutics Initiative and African Brain Mapping Initiative. He is also 14 times marathon runner.