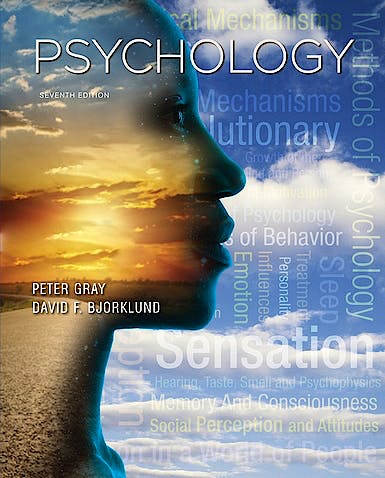 Peter Gray's evolutionary perspective and emphasis on critical thinking have made his rigorous yet accessible introduction to psychology a widely respected classroom favourite. Now thoroughly revised, with the help of new co-author David Bjorklund,Psychology, Seventh Edition, invites students to investigate the big ideas in psychological science.

PART I: BACKGROUND TO THE STUDY OF PSYCHOLOGY
1. Foundations for the Study of Psychology
2. Methods of Psychology

PART II: THE ADAPTIVENESS OF BEHAVIOR
3. Genetic and Evolutionary Foundations of Behavior
4. Basic Processes of Learning

PART III: PHYSIOLOGICAL MECHANISMS OF BEHAVIOR
5. The Neural Control of Behavior
6. Mechanisms of Motivation and Emotion

PART VI: GROWTH OF THE MIND AND PERSON
11. The Development of Body, Thought, and Language
12. Social Development

PART VII: THE PERSON IN A WORLD OF PEOPLE
13. Social Perception and Attitudes
14. Social Influences on Behavior

Peter O. Gray was a full-time professor of psychology at Boston College, USA, where he maintains a position as Research Professor. He has published research in biological, evolutionary, cultural, developmental and educational psychology; published articles on innovative teaching methods and taught more than 20 different undergraduate courses, including, most regularly, introductory psychology. Most of his current research and writing has to do with the value of play, especially free age-mixed play, in children's development. He is author of a popular weekly blog entitled Freedom to Learn: The Roles of Play and Curiosity as Foundations for Learning.

David F. Bjorklund, Ph.D., is a Professor of Psychology at Florida Atlantic University, USA. He served as Associate Editor of Child Development (1997-2001) and is currently serving as Editor of the Journal of Experimental Child Psychology. He has published more than 170 scholarly articles on various topics relating to child development and evolutionary psychology and has received financial support for his research from the National Science Foundation, the Spencer Foundation, and the German Research Foundation.