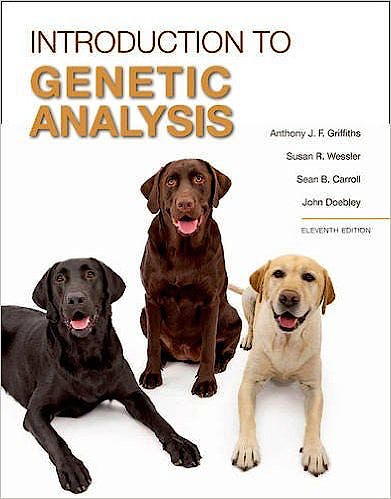 With each edition, An Introduction to Genetic Analysis (IGA) evolves discovery by discovery with the world of genetic research, taking students from the foundations of Mendelian genetics to the latest findings and applications by focusing on the landmark experiments that define the field.

With its author team of prominent scientists who are also highly accomplished educators, IGA again combines exceptional currency, expansive updating of its acclaimed problem sets, and a variety of new ways to learn genetics. Foremost is this edition's dedicated version of W.H. Freeman's breakthrough online course space, LaunchPad, which offers a number of new and enhanced interactive tools that advance IGA's core mission: to show students how to analyze experimental data and draw their own conclusions based on scientific thinking while teaching students how to think like geneticists.

1. The Genetic Approach to Biology
2. Single-Gene Inheritance
3. Independent Assortment of Genes
4. Mapping Eukaryote Chromosomes by Recombination
5. The Genetics of Bacteria and Their Viruses
6. Gene Interaction
7. DNA: Structure and Replication
8. RNA: Transcription and Processing
9. Proteins and Their Synthesis
10. Gene Isolation and Manipulation
11. Regulation of Gene Expression in Bacteria and Their Viruses
12. Regulation of Gene Expression in Eukaryotes
13. The Genetic Control of Development
14. Genomes and Genomics
15. The Dynamic Genome
16. Mutation and Repair
17. Large-Scale Chromosomal Changes
18. Population Genetics
19. The Inheritance of Complex Traits
20. Evolution of Genes and Traits

Anthony Griffiths is a Professor of Botany, Emeritus, at the University of British Columbia. His research focuses on the developmental genetics of fungi, using the model fungus Neurospora crassa. He has served as President of the Genetics Society of Canada and Secretary-General of the International Genetics Federation.

Susan R. Wessler is Distinguished Professor of Genetics in the Department of Botany and Plant Sciences at the University of California, Riverside. Her research focuses on plant transposable elements and their contribution to gene and genome evolution. Wessler was elected to the National Academy of Sciences in 1998. As a Howard Hughes Medical Institute Professor, she developed and teaches a series of Dynamic Genome Courses where undergraduates can experience the excitement of scientific discovery.

Sean B. Carroll is an Investigator at the Howard Hughes Medical Institute and Professor of Molecular Biology and Genetics at the University of Wisconsin, Madison. Carroll is a leader in the field of evolutionary developmental biology and was elected to the National Academy of Sciences in 2007. He is also the author of Endless Forms Most Beautiful, The Making of the Fittest, and Remarkable Creatures (a finalist for the National Book Award, non-fiction, 2009).

John Doebley is a Professor of Genetics at the University of Wisconsin-Madison. He studies the genetics of crop domestication, using the methods of population and quantitative genetics. He was elected to the National Academy of Sciences in 2003 and served as the President of the American Genetic Association in 2005. He teaches General Genetics at the University of Wisconsin.