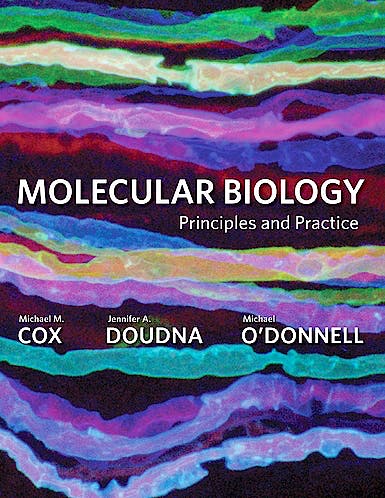 Written and illustrated with unsurpassed clarity, Molecular Biology: Principles and Practice introduces fundamental concepts while exposing students to how science is done. The authors convey the sense of joy and excitement that comes from scientific discovery, highlighting the work of researchers who have shaped - and who continue to shape - the field today.

MICHAEL M. COX was born in Wilmington, Delaware. After graduating from the University of Delaware, USA, in 1974, Cox went to Brandeis University to do his doctoral work with William P. Jencks, and then to Stanford in 1979 for postdoctoral study with I. Robert Lehman. He moved to the University of Wisconsin-Madison, USA in 1983, and became a full professor of biochemistry in 1992. His research focuses on recombinational DNA repair processes. In addition to the work on this text, Cox is a co-author of four editions of Lehninger Principles of Biochemistry. He has received awards for both his teaching and his research, including the 1989 Eli Lilly Award in Biological Chemistry, and two major teaching awards from the University of Wisconsin, USA, and the University of Wisconsin System. His hobbies include travel, gardening, wine collecting, and assisting in the design of laboratory buildings.

JENNIFER A. DOUDNA grew up on the Big Island of Hawaii, where she became interested in chemistry and biochemistry during her high school years. She is currently Professor of Molecular and Cell Biology and Professor of Chemistry at the University of California, Berkeley, USA, and an Investigator of the Howard Hughes Medical Institute. She received her B.A. in Biochemistry from Pomona College, USA, and her Ph.D. from Harvard University, USA, working in the laboratory of Jack Szostak, with whom she also did postdoctoral research. She next went to the University of Colorado, USA, as a Lucille P. Markey scholar and postdoctoral fellow with Thomas Cech. Doudna has also been a Donaghue Young Investigator, a Searle scholar, and a Beckman Young Investigator, and she is a former fellow of the David and Lucile Packard Foundation. She has received numerous awards for her research on RNA and RNA-protein structure and function, including the Johnson Foundation Prize for innovative research, the National Academy of Sciences Award for initiatives in research, the Alan T. Waterman Award from the National Science Foundation, and the Eli Lilly Award in Biological Chemistry from the American Chemical Society. She is a member of the Scientific Advisory Board of the David and Lucile Packard Foundation and a Trustee of Pomona College. Doudna is a member of the National Academy of Sciences and the American Academy of Arts and Sciences. She is also a Fellow of the American Association for the Advancement of Science.

MICHAEL O'DONNELL received his Ph.D. at the University of Michigan, USA, where he worked under Charles Williams Jr. on electron transfer in the flavoprotein thioredoxin reductase. He performed postdoctoral work on E. coli replication with Arthur Kornberg and then on herpes simplex virus replication with I. Robert Lehman, both in the biochemistry department at Stanford University. O'Donnell then became a member of the faculty of Weill Cornell Medical College in 1986 and an investigator at the Howard Hughes Medical Institute in 1992 before moving to The Rockefeller University, USA in 1996. O'Donnell is a member of the National Academy of Sciences.