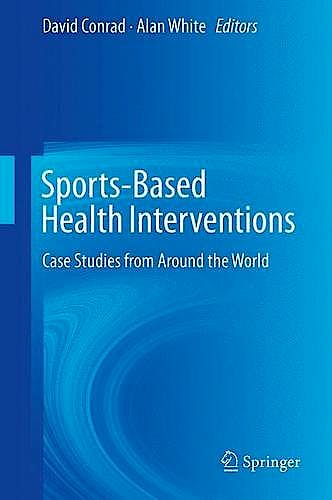 Sports-Based Health Interventions. Case Studies from Around the World

This book captures a broad sample of work from around the world, providing those commissioning and delivering health interventions with both inspiration and practical guidance for setting up sports-based public health projects in their own areas. Using a case study approach, the book has an emphasis on the practical realities of delivering public health work balanced with an overview of current theory, evidence and policy. Sport is increasingly featured in the delivery of public health interventions across the globe, from small scale grassroots projects in local communities to health partnerships with major sporting events on the international stage. The role of sport in public health goes far beyond efforts to promote physical activity; with programmes as diverse as chlamydia screening in Australia and post-emergency psycho-social interventions in areas stricken by conflict and natural disasters.

Alan White is a professor of Men's Health at Leeds Met University. David Conrad is a Specialty Registrar in Public Health at Liverpool PCT and Associate Member of the Centre for Men's Health at Leeds Met. Together they have previously edited two books for health professionals – Men's Health: How To Do It (published by Radcliffe in 2007) and Promoting Men's Mental Health (Radcliffe 2010). Professor White is currently evaluating the Premier League Health with the English Premier League, is part of the Evaluation team of the Fit Fans in Training initiative with the Scottish Premier League and has run a two season long health campaign with the Leeds Rhino’s Rugby League team. He has recently headed up the completion of the ‘State of Men’s Health in Europe Report’ for the European Commission.