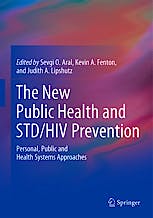 Despite effective approaches to prevention, STD and HIV infection rates remain fairly constant. Targeting, implementation, and monitoring of interventions have posed widespread problems, and the recent spate of cuts to prevention budgets has made these roadblocks even more challenging. It is clear that working in sexual health requires both a deeper understanding of STI/HIV epidemiology and an ongoing quest for up-to-date, realistic prevention strategies.

The New Public Health and STD/HIV Prevention offers readers leading-edge access to both.Focusing on social determinants of sexual health, at-risk populations, critical factors in approaches to prevention, and reviews of new research, this authoritative volume explores areas as varied as HPV prevention, technology-based interventions, migration as a factor in disease transmission, and competencies key to effective leadership in the field. Dispatches from the frontlines of theory, research, and practice in the U.S. and abroad include:

· Personal risk, public impact: balancing individual rights and STD/HIV prevention.
· Distribution of prevention resources and its impact on sexual health.
· Prevention measures in diverse populations of women.
· Toward a better approach to preventive interventions with men who have sex with men.
· Adolescent sexual health and STIs.
· Reducing disparities in sexual health: lessons from the campaign to eliminate infectious syphilis.

Public health professionals of all backgrounds interested in or working in improving sexual health will find The New Public Health and STD/HIV Prevention an indispensable guide to conceptualizing the problems and clarifying possible solutions.

Sevgi O. Aral, MA, MS, PhD, has been the Associate Director for Science in the Division of STD Prevention, Centers for Disease Control since 1993. She holds professorial appointments at the University Of Washington in Seattle; University of Manitoba in Winnipeg and Emory University in Atlanta. Dr. Aral has authored more than 230 scientific articles and edited 16 journal issues and 2 books. Dr. Aral has served on many national and international work groups, boards and committees; and has consulted for the World Health Organization, The European Union and the World Bank. She has received the ASTDA Achievement Award and the Thomas Parran Award. Over the years, her research interests have included social and behavioral aspects of sexually transmitted disease epidemiology and prevention; including gender, age and race effects; mixing patterns; sexual and social networks; contextual factors; social determinants and most recently, program science. Dr. Aral came to the Centers for Disease Control in 1978 from Middle East Technical University in Ankara, Turkey where she was the chair of the Department of Social Sciences.

Kevin Fenton, MD, PhD, FFPH, is the Director of the National Center for HIV/AIDS, Viral Hepatitis, STD, and TB Prevention (NCHHSTP), Centers for Disease Control and Prevention (CDC), a position he has held since November 2005. Previously, he was chief of CDC’s National Syphilis Elimination Effort and has worked in research, epidemiology, and the prevention of HIV and other STDs since 1995. Before coming to CDC, he was the Director of the HIV and STI Department at the United Kingdom’s Health Protection Agency. At CDC, Dr. Fenton has led a number of critical efforts to address the U.S. HIV epidemic, including the release of revised HIV screening recommendations to make HIV testing a routine part of medical care for all Americans, and the implementation of a new surveillance system to provide more precise estimates of new HIV infections in the United States. Under Dr. Fenton’s leadership, CDC has also expanded its efforts to engage, mobilize, and partner with at-risk communities to address health disparities, and CDC launched Act Against AIDS, the first national HIV/AIDS public health communications campaign in 20 years. He has authored or co-authored more than 200 peer-reviewed scientific articles and policy reports.

Judith A. Lipshutz, MPH, is Deputy Associate Director for Policy in the Office for State, Tribal, Local and Territorial Support at the Centers for Disease Control and Prevention (CDC) where she has worked since June 2010. Her work focuses on policy issues related to public health systems infrastructure strengthening. Prior to this position, she worked in the Division of STD Prevention (DSTDP) in CDC’s National Center for HIV/AIDS, Hepatitis, STD and TB Prevention for 17 years. Between 1996 and 2010, she coordinated both scientific and programmatic aspects of the National STD Prevention Conference, the premier domestic STD prevention meeting in the U.S. As part of the Office of the Associate Director for Science, she authored or edited a number of publications, including peer-reviewed journal articles and books. For 7 years in DSTDP, she served as the chief of the Communications and External Relations Office during which time she coordinated CDC’s National STD Prevention Partnership. Prior to coming to CDC, she spent over 11 years as the Project Director for AIDS Initiatives and the Venereal Disease Action Coalition at United Community Services in Detroit, where she initiated and oversaw the city’s largest AIDS case management system. Earlier, she coordinated adolescent health services at Su Clinica Familiar, a migrant health center in south Texas. Ms. Lipshutz received her B.A. from Mt. Holyoke College in 1975 and her M.P.H. from the University of Michigan in 1980.