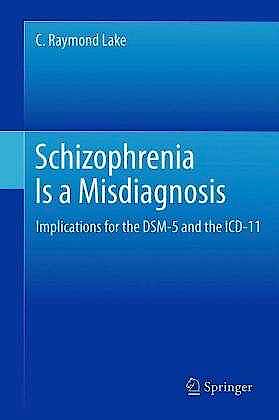 Schizophrenia is a Misdiagnosis. Implications for the Dsm-5 and the Icd-11

Schizophrenia is a Misdiagnosis: Implications for the DSM-5 and the ICD-11 C. Raymond Lake Schizophrenia: the lay public knows a general picture formed from popular culture, familiar legend, and, often, family history. The professional community knows a clinical profile gleaned from decades of scientific theory and findings. But recently a growing body of literature has begun to suggest not only that the diagnosis of schizophrenia is misleading, but that the concept of the disease itself is outmoded. Schizophrenia is a Misdiagnosis makes a persuasive, well-documented argument for the constellation of symptoms commonly known as schizophrenia as a psychotic form of bipolar disorder. The book documents the long history of both disease entities, from the pioneering work of Kraepelin and Bleuler to the rise of drug treatments in the 1950s to today’s brain imaging and genetic studies. Long-standing questions regarding key diagnostic symptoms are examined in depth. And the author details the negative sequelae of misdiagnosis—from social stigma to inappropriate and even dangerous treatment—necessitating wide-scale revision. Among the areas covered: The scientific basis for establishing validity of diseases and their diagnoses. The overlap of symptoms and course between schizophrenia and mood disorders, from DSM-I to DSM-V. Medical and other psychiatric conditions often misdiagnosed as schizophrenia. The impact of misdiagnosis on patients and their caregivers. Why the concept of schizophrenia continues to survive. Proposed changes within and outside psychiatry. A book with the potential to inspire critical change, Schizophrenia is a Misdiagnosis is necessary reading for psychologists, psychiatrists, psychiatric nurses, social workers, primary care physicians, family practitioners, and neurologists.

C. Raymond Lake, M.D., Ph.D., began his research career in biological psychiatry at the NIMH and published data papers on patients diagnosed with schizophrenia. Dr. Lake is currently a professor of Psychiatry at the University of Kansas, School of Medicine, in Kansas City, Kansas. His expertise includes Psychoneuropharmacology and bipolar disorder. He has published several pieces recently concluding there is only one disorder, a psychotic mood disorder, which accounts for a patient’s functional psychoses.