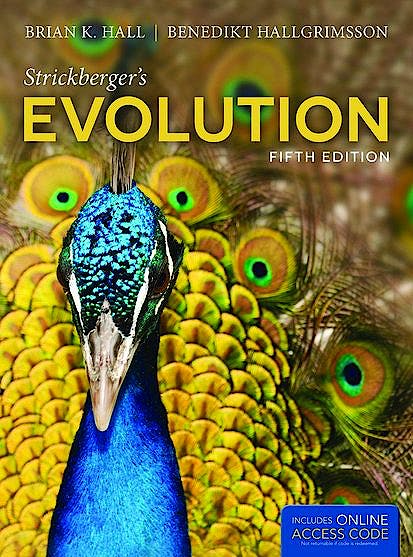 Now with a new full color design and art program, the Fifth Edition of Strickberger's Evolution is updated with the latest data and updates from the field. The authors took care to carefully modify the chapter order in an effort to provide a more clear and student-friendly presentation of course material. The original scope and theme of this popular text remains, as it continues to present an overview of prevailing evidence and theories about evolution by discussing how the world and its organisms arose and changed over time. New boxed features concentrating on modern and exciting research in the field are included throughout the text.

New and Key Features of the Fifth Edition

Brian K. Hall-Dalhousie University
Brian Hall, born, raised and educated in Australia, has been associated with Dalhousie University in Halifax, Nova Scotia since 1968, most recently as a University Research Professor and George S. Campbell Professor of Biology, and since July 2007 as University Research Professor Emeritus. He was Killam Research Professor at Dalhousie University (1990-1995), Faculty of Science Killam Professor (1996-2001) and Canada Council for the Arts Killam Research Fellow (2003-2005).
Trained as an experimental embryologist, for the past 40 years he has undertaken research into vertebrate skeletal development and evolution and played a major role in integrating evolutionary and developmental biology into the discipline now known as Evolutionary Developmental Biology (evo-devo); he wrote the first evo-devo text book , published in 1990 and a second edition in 1999 (Hall 1999a).
A fellow of the Royal Society of Canada and Foreign Honorary Member of the American Academy of Arts and Sciences, Dr. Hall has earned numerous awards for his research, teaching and writing, including the 2005 Killam Prize in Natural Sciences, one of the top scientific awards in Canada.

Based at the University of Calgary, Dr. Hallgrímsson teaches organismal biology and anatomy. There he has received several Gold Star Teaching Awards, a Letter of Excellence Lecturer Award and the McLeod Distinguished Achievement Award. He is featured on the University of Calgary "Great Teachers" website. From the American Association of Anatomists he received the Basmajian/Williams and Wilkins Award for educational contributions in 2001.