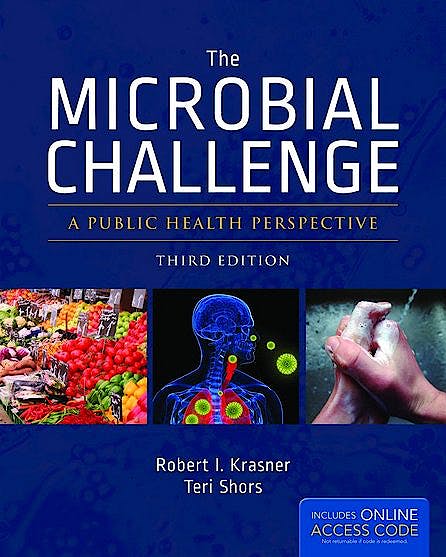 Microbes play a highly significant role in our daily lives as agents of infectious disease and are a major public health concern. The third edition of The Microbial Challenge: A Public Health Perspectiveaddresses this topic and has been extensively revised and updated with the latest data in a fast-paced field. It focuses on human-microbe interactions and considers bacterial, viral, prion, protozoan, fungal and helminthic (worm) diseases. A chapter on beneficial aspects of microbes makes it clear that not all microbes are disease producers and that microbes are necessary for the sustenance of life on Earth. The response of the immune system, concepts of epidemiology, and measures of control from the individual to the international level to thwart potentially life-threatening epidemics are described. Sections on fungi and fungal diseases are new. The third edition includes new and contemporary information on vaccinations, antibiotic resistant microbes, practical disinfection information, virotherapy and emerging diseases. New boxes throughout the text feature items of human interest such as big and bizarre viruses, probiotics, rats, and synthetic biology. Ancillary instructor and student resources have been updated and expanded including the end of the chapter Self Evaluations.

New and Key Features of the Third Edition:

Robert I Krasner, PhD, MPH-Professor Emeritus, Providence College
Professor Emeritus Robert I. Krasner, a member of the Department of Biology at Providence College (Rhode Island), retired after 50 years of teaching and research. His appointment at Providence College started in 1958, shortly after his service as a young army officer stationed in Japan that, according to Krasner, sparked his love for travel. During his tenure he was responsible for the development of new courses and mentoring students in research, He was recognized on several occasions for excellence in teaching. The Robert I. Krasner Teaching Award was established upon his retirement at the college to recognize outstanding graduating seniors. Krasner is the author of 20th Century Microbe Hunters, scientific papers, and a contributor to other scholarly works. He spent sabbaticals and leaves of absence at numerous domestic and foreign institutions including Fort Detrick Army Biological Laboratories, Georgetown University School of Medicine, and in Israel, France, Brazil, and England. At 69 years of age, he was accepted into the Harvard School of Public Health and earned a Masters of Public Health (M.P.H.) degree; he was the oldest full-time student to have accomplished this.

Over the years, Krasner attended and presented papers at numerous annual meetings of the American Society for Microbiology. Teaching remained his major interest, and when asked by colleagues "what (research) he was working on," his favorite reply was "students." His initiative led to the establishment of the Division for Microbiology Educators. Krasner’s career was further highlighted by the presentation of over 60 papers in the United States and abroad. He continues to lecture occasionally and enjoys gardening, pet therapy, studio art, and playing the harmonica

Teri Shors - Professor, University of Wisconsin-Oshkosh
Teri Shors has been a member of the Department of Biology and Microbiology at the University of Wisconsin Oshkosh since 1997; she was promoted to the rank of Professor in 2010. Shors is a devoted teacher and researcher at the undergraduate and graduate levels and has been a recipient of university awards, including a distinguished teaching award and two endowed professorships. She has taught a variety of courses and laboratories and has made a strong contribution to the development of new courses in microbiology and molecular biology in the department.
Shors’ graduate and post-graduate education is virology-based and is reflected in her research. Before teaching at UW Oshkosh, she was a postdoctoral fellow in the Laboratory of Viral Diseases under the direction of Dr. Bernard Moss in the National Institute of Allergies and Infectious Diseases (NIAID) at the National Institutes of Health (NIH). While her initial expertise centers upon studying the expression of vaccinia virus genes, she is currently interested in the potential of anti-viral compounds in cranberries, other fruits, and herbs used as green medicine in Hmong culture. This anti-viral research has been funded by a variety of granting agencies, including a prestigious Merck/AAAS award. Shors has mentored many students engaged in independent research projects and related readings.

Shors contributes strongly as a co-author to the 3rd edition of The Microbial Challenge. She is the author of Understanding Viruses, now in its 2nd edition and has recently authored Encounters in Virology. Additionally, she has contributed to and authored a variety of other texts and scientific writings.

Initiative, creativity, using technology in the classroom, networking, and leading collaborative, cross-disciplinary studies are all hallmarks of Shors’ talents. Her use of technology, current events topics, and humor makes her popular among students in the classroom. She has recently developed and taught an online virology course for undergraduates.