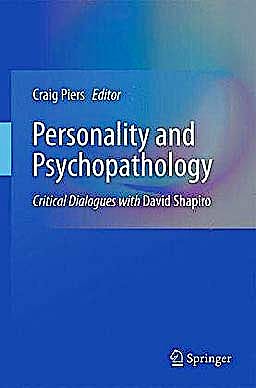 Piers, C.SPRINGERENpsicologíapsiquiatría
ABOUT THIS BOOK

With his penetrating theory of personality and his nuanced understanding of the psychotherapeutic relationship, David Shapiro has influenced clinicians across the theoretical spectrum since the publication of Neurotic Styles in 1965. This influence is on vivid display in Personality and Psychopathology, as noted contemporary theorists critically evaluate his work in a fascinating dialogue with Shapiro himself. Starting with a crucial therapeutic observation—the centrality of the relationship between what the client says in session and how it is said—contributors revisit his core concepts regarding personality development, the prevolitional aspects of psychopathology, the limits to self-understanding, and the defensive uses of self-deception in light of current psychodynamic, evolutionary, and systems theory. Shapiro’s replies, and the contributors’ rejoinders, highlight points of departure and agreement and provide further clarification and extension of his ideas on a wide range of salient topics, including: • The experience of autonomy in schizophrenia. • Defensive thinking to prevent dreaded states of mind. • The linguistics of self-deceptive speech. • Self-deception as a reproductive strategy. • Intentionality and craving in addiction. • The subjective experience of hypomania. Personality and Psychopathology affords psychotherapists and research psychologists not only a unique opportunity to gain insight into Shapiro’s contributions, but also new lenses for re-examining their own work.

Craig Piers, Ph.D. is a senior psychologist and psychotherapy supervisory in the health center at Williams College, and formerly, Associate Director of Admissions and a senior supervising psychologist at the Austen Riggs Center. Dr. Piers frequently presents his work nationally and his published articles and book chapters have addressed personality disorders and assessment, psychotherapeutic impasse, suicide and complex systems theory. Dr. Piers is co-editor (with John Muller and Joseph Brent) of Self-Organizing Complexity in Psychological Systems (Aronson, 2007), an Associate Editor of Psychoanalytic Dialogues, and serves as a reviewer for several other professional journals.